We had a great weekend to close out winter:  CAMPING!  CH & I both took the day off so we could leave Friday morning.  The "Dixie Chapter Tearjerkers" had their first campout of the season in Scottsboro, Alabama.  It was a 3 hour drive for us, which wasn't too bad of a drive.  And, since it wasn't too far from CH's brother & one of my brothers, they came, too.  CH's brother has a camper, and my brother pitched a tent.  Our campsite was right on the water: 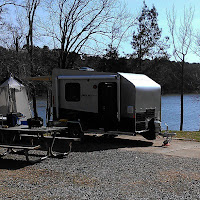 The downside to the site was that we caught all of the wind, but the view was worth it.  Friday night was a "sit around the campfire and chat" night.  The weather was perfect:  upper 60's - 70's during the day, and cool enough at night to have a fire, but we didn't need to turn on the heater in the camper.

The sunset from the site on Friday was gorgeous: 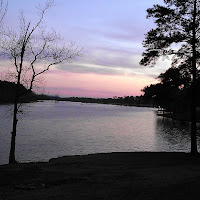 Saturday morning, CH's best friend from high school (who lives near the campsite) drove over and treated us to breakfast:

Saturday we rode to the "Unclaimed Luggage" place to "treasure hunt".  My SIL found a baking pan, and I found some noise cancelling earphones for my trip (only 2 months & 3 days!) for $3.  I haven't checked to make sure they work, but I figured if they didn't, I'm only out $3.  My brother found a tent for $18:  the tent they slept in on Friday was fine, but the wind-flap was for a bigger tent.  When the wind picked up around 4 a.m., it woke them up.  The "new" tent worked like a champ for them.

Saturday night, the Tearjerkers had a chili potluck.  CH & I went down and ate.  He stayed down a little longer than I did; I went back up and got everything cleaned up.  Even though the Tearjerker group was for people in Ga. & Al., I think there were more people from Tn. who were there.  And, only 2 or 3 actually had teardrop campers; most of us had small campers.

After the potluck, it was time for another fire: 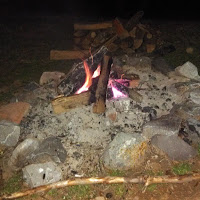 One of my SIL's & I had made S'Mores Martinis on Friday night, and we started thinking about it, and decided to make more Saturday night, but add Kahlua and throw some ice in the blender to mix everything up.  Let me just say this:  Marshmallow Fluff Vodka is simply amazing!

Sunday morning CH made cinnamon rolls & biscuits in the dutch ovens, and we had scrambled eggs, bacon, and fruit.  Then we all packed up and headed home.  YS got home from the band's spring trip (a cruise to the Bahamas...NOT on Carnival!) Friday night and stayed with a friend over the weekend, so I was anxious to see him and hear all about his trip.  He had a much better time on his senior band trip than I had on mine, but that's a whole different story!

Today starts spring break for me, so I'm going to really try to make it around to visit everybody!
Email ThisBlogThis!Share to TwitterShare to FacebookShare to Pinterest