We had an unexpected snow day yesterday.  YS still had school.  CH was going to go in to work, until I saw the traffic report on tv.  Someone had slid off of the road and the interstate was backed up....waaaay up.  So, he decided to work from home.  He shut himself up in "his office" so Laika wouldn't think it was Saturday and want to go to the dog park, or to Petsmart to play with the kittens.  Here are Pepper & Laika in the morning: 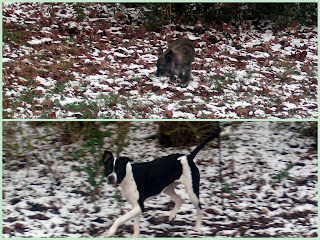 Yep, that was pretty much the extent of the amount of snow we had at my house.  Since I work for the county schools (which include some hills that we call "mountains"!), I guess some of the roads were bad.  I'm not complaining!  The snow was pretty much gone by 10:00.

We were able to have lunch out, and it was a perfect day for this:

We have a small, hole-in-the-wall Cuban restaurant in town that is excellent.  We hadn't eaten there in a while, so we went in for lunch.  The bonus is that I get to have it again today:  I only ate half of it, so I get leftovers for lunch today!  PERFECT!!!

I saw a recipe for "make your own Thin Mints" and decided to mess it up try it.  I know exactly what I did wrong:  you're only suppose to mix up the flour until the dough starts to crumble, not until it does crumble and you have to add milk to make it stick together so you can roll it out.  I also think there's just a little too much cocoa in it.  I may try these again and see if I can fix it.  Oh, and the chocolate covering is melted chocolate chips with peppermint extract. I thought the cookies were suppose to be dipped, but for some reason the chips were too thick, so I ended up spreading it on. 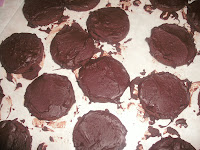 They are edible, but I'm going to have to either ask the blogger about it, or try to tweak it myself.

What do you like to do if you have an unexpected snow day, whether you're stuck in the house or can get out?
Email ThisBlogThis!Share to TwitterShare to FacebookShare to Pinterest