Ghosts of Championships Past

This week has been Championship Week in the Small Town.  For the football players, the week goes something like this:
Monday:  Practice.
Tuesday:  Practice
Wednesday:  Practice
Thursday: Walk through
"How is that different from any other week?" you may be asking yourself.  Well, it isn't.  Except for practicing at least once in the nearby big city at an indoor facility that has artificial turf, which is what they'll be playing on this afternoon.
Championship Day will be a little different than a normal game day:  The boys will meet at school and have breakfast.  Then, there will be a pep rally involving the whole school.   They will get on the bus and travel a few yards (literally) to the middle school. 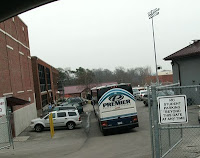 There, they'll get off the bus and greet the middle school who will be lined along the sidewalk in front of the school.  They'll go through a "receiving line", if you will; shaking hands and giving high fives to the student body.  After that, they will get back on the bus and ride down the hill to the elementary school.

Now that is the place to be to see the excitement.  The middle schoolers are, well, middle schoolers, so they're not all that excited to see the high school players.  Oh, but at the elementary school there are signs made and hung on the fence. 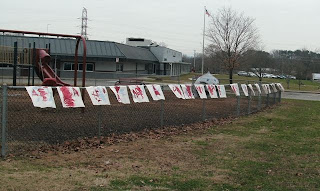 Every elementary student (K through 4th grade) is lined along the sidewalk anxiously awaiting to get their high-five and see their heroes.  It doesn't matter if they're first or last string...every player gets a hero's welcome.

Last year, the Pre-K was already at lunch and missed the send off, but they let the boys know they were thinking about them: 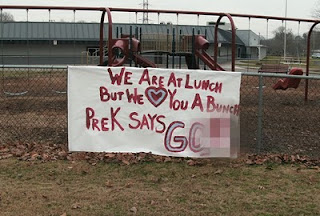 And then the big moment arrives:  The bus is spotted coming down the driveway to the school: 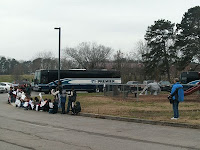 The kids start jumping up and down, and the excitement mounts.  After what seems like forever, the bus stops and the coaches step off of the bus.

And then the boys.  Most of them with their "game faces" already on.

When the last boy has gone through the line, the bus slowly leaves to make its way to the University that hosts the games. 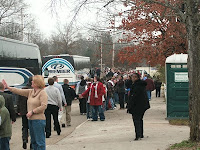 School lets out early so the fans can make their way 1 1/2 hours down the interstate.  Last year was the first year the championships have been held at that university:  before then championship weekend had been dubbed "________ County's Biggest Sleepover".  The university that it had been held at was about 3 1/2 hours away, and our game was played at 7:30.  It was so fun to go down, check into the hotel, see who else was in the hotel, go to the game, go out to eat, than get up the next morning and have breakfast with other fans from the school, read the paper, and talk about the game.  Our rival school (that is only about 10 miles from the small town school) has been to the state championships the same years we have been...the only exception is that they haven't won for the last 2 years.  So, a lot of their fans would go down the day before to watch our game, and a lot of our fans would stay and watch them play the next day.  But, now that the game is played closer, most people go back home after the game.
Last year it was pretty cold.  My mom & dad rode down with us to watch MS play his last football game: 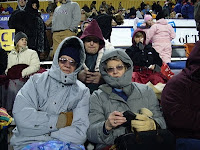 (Told you it was cold!  That's CH right behind them.)
A couple of years ago it was actually balmy, but the year before that, it was freezing, and the wind would just cut right through you.  One year, one of my BILs called me right at the end of the game and asked me what I was doing!  Funny guy!  He had watched the game on tv, so he knew the perfect time to call.  The high today is suppose to be around 50, but when the sun goes down it's going to get chilly.
Last night "the bridge" was painted: 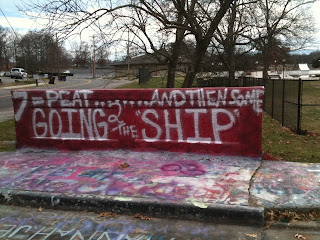 And the boys got into bed early to do what has become a yearly tradition. They'll get on a bus where the number will change to "7": 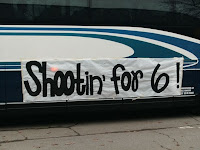 And they'll "get 'em up" before taking the field:

Hopefully the result will be the same, because no one wants to be known as "the team that broke the streak". 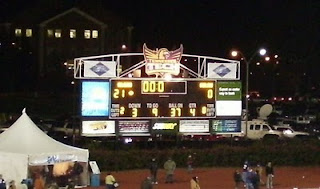 And not to be forgotten:  the boys and girls who have worked all season long to entertain the fans:

Here's to a good time, clean game, and no injuries!  Oh, and may the result look like this: 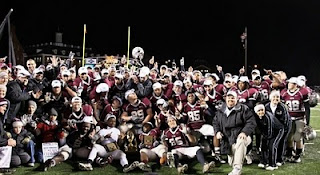