Whew! What a week, what a week!  After enjoying a white Christmas (the first in this area since 1992), we loaded up the car and headed to L.A. (Lower Alabama).  We woke up to around 2 inches of the white stuff on Sunday, and discussed whether we should leave or wait. 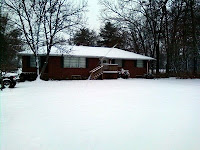 The news reported that the interstates were fine, so we CH decided to go for it.  We got about 20-25 minutes down the road, and I asked FES if he had his passport.  Or any id.  Or his insurance card.  We doubled back, picked up his id, used the bathroom, and off we went...again.  We drove in snow all the way south of Birmingham.  Unusual, to say the least. 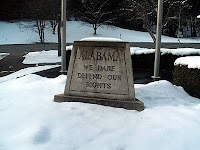 My FIL had arranged a cabin for us to stay in on a lake.  Nothing fancy, just the basics, but it was better than staying in a hotel (they don't have room for us in their house).  Here's the morning view we had: 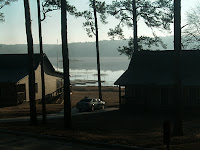 Too bad it was so cold...the cabin had a screened-in porch with rocking chairs.
"What is there to do in Lower Alabama?"  you might ask.  You can go to the Army Aviation Museum:

They have this circular room with all of the names of aviators who have lost their lives while in the line of duty. In the middle of the room, there is this statue: 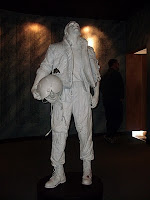 Paying homage to the Boll Weevil is a must when visiting this town in LA: 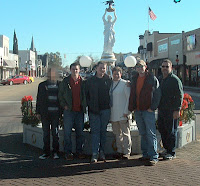 Isn't she beautiful, all dressed up for Christmas?  Oh, and to put my boys' sizes in perspective:  I'm 5'9".  Yes, I have big boys!
We went by the new high school; it just opened this fall after being destroyed by a tornado 3 years ago.  CH had to get out on the new field; luckily one of the assistant coaches (who was a former teammate) came by just as we got there. 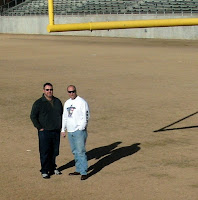 What else would you do when you're this close to Florida?  Go the beach, of course! 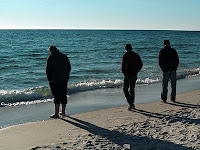 It just so happens what one of my blogging friends lives in the area, so we were able to meet up for a while!  "Where's the picture?" you ask.  Well, Auburnchick doesn't put pictures on her blog, so I didn't take one.  I had my camera in my pocketbook, but didn't even get it out.  She's the second blogger I've met.  It was like we'd known each other forever.  Seriously.  Her husband discovered that I'm not a mass murderer, and CH was relieved that she wasn't an Armenian man who had just been released from prison.  I don't think there was ever a lull in the conversation; I just wish we had more time, because I keep thinking about things I wanted to talk to her about!  Guess I'll just have to make another trip down there sometime!
We ended the year with new windows.  Yes.  NEW WINDOWS!  They are gorgeous!  Here's the before picture:

And the after picture: 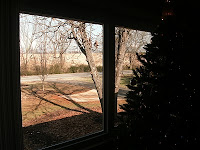 Oh.  My.  The silence is absolutely golden.  I'm not feeling any kind of draft as I sit in the living room.  I love, love, love these windows!  And, one of the best parts is the tax credit we'll get!
Here's wishing everyone a Healthy and Happy New Year!

Email ThisBlogThis!Share to TwitterShare to FacebookShare to Pinterest
Labels: family