What an exciting weekend we had! Saturday I got the house decorated for Christmas...except for the tree.  I wanted to save that until Sunday night (you'll understand in a minute).  The Small Town's boys' soccer team had a fundraiser at McAlister's Deli, so we went down for dinner to help them out.
Sunday morning, we got a new addition to our family:  an exchange student.  He had been in the country since September, but wasn't happy with the family with whom he was placed.  Why in the world would someone want to host an exchange student when they don't have a child close to the student's age, don't live in the same school zone as the school, and aren't going to take the time to listen and talk to the child?  They definitely missed out.  You'll definitely be reading some of our adventures from now until June (when he leaves).  I will call him "FES" (foreign exchange student...get it?); if you watched "That 70's Show", you understand where that came from.  For privacy purposes, I will not post pictures of him or let you know where he is from.  Let's just say that his culture is very different from ours; it's going to be very interesting learning about his culture.
Sunday morning, we did some last minute cleaning/getting ready for FES.  He got here around 11:00, then we had to do some last minute orientation with the manager of the organization (laying down the rules of the house), and he was ours.  By the end of the night, he was making his own jokes and just being a teenager.  I really hope we can give him a good experience as an American teenager.  He is going to play soccer for the high school team, so I get to hang out with my soccer mom friends one more year!
Sunday CH & I went out in search of a new washing machine.  Mine finally went "caput" Saturday.  I didn't think the clothes were being washed; turns out the agitator wasn't working.  It was a very inexpensive washer, so we figured it would be cheaper to just get a new one.  Plus, we had had the old one for over 6 years. 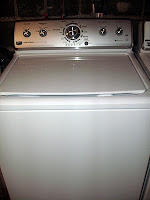 Isn't she a beaut?  I'm trying to get used to not having the big agitator in the middle of the barrel!
That night, FES decorated his first Christmas tree!  He was such a big help, and was chatting the whole time.  (Yes, I told him he was my favorite since he helped the most!)

Since it was snowing, he kept looking out the window, and by the end of the night, was asking if they would have school Monday.  (The boy learns quickly!)  The county schools (where I work) were out, and both city school systems were out, too.  They don't get out very often, so that will give you an idea of how bad the roads were supposed to have been.  I know the yankees are laughing, but we don't have much snow equipment (the small town has 1 snow plow) since we don't get that much snow down here.  There's something so beautiful about seeing Christmas lights in the snow; something we rarely see here! 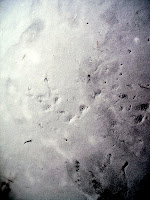 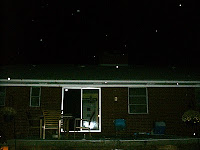 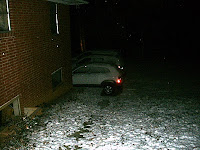 The weird thing is that I didn't realize it was snowing until I saw the pictures.
And I have another day off today.  Hooray!  I'm anxious for FES to get into a routine:  this afternoon he has his first day of voluntary training for soccer.  MS is also going to work out with them; he has to stay in shape for Rugby.  YS has his band concert tonight, so we're going to be going full force today.

Email ThisBlogThis!Share to TwitterShare to FacebookShare to Pinterest
Labels: famiy