This doesn't have anything to do with Hard Candy (actually nothing in this post does), but I wanted to keep with my theme of using Christmas songs for my post titles.  This is the closest thing I could think of that had to do with candy!
I saw this on FB yesterday and loved it.  The dog reminds me of my Jack Russell Mix.  Although she doesn't look anything like this dog, her actions are very close to this dog's, and I can imagine her doing this same thing!

The past couple of days have been spent shopping and baking/making candy.  I started making crap goodies Sunday afternoon.  FES about died when I told him my rule about not eating anything until everything was finished and in tins.  The first thing I made was something new this year:  Chocolatey Chocolate Chip Cookie Cups. 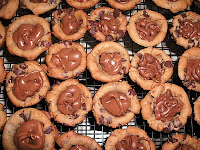 They were super easy.  When I took them out of the oven, I took a spoon and gently pushed down the cookie in the middle to make sure the well was large enough to put in the melted chips.  I don't know if they would've gone down on their own, but I didn't have the patience to wait, and the spoon did a nice job!
I just realized I told a little lie about starting my goodies-making:  I actually made Easy Oreo Truffles on Sat. night. 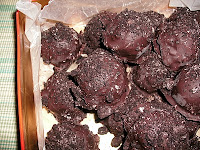 Ummm, yeah, I'm pretty sure I made them waaaay too big, 'cause I definitely didn't get 4 dozen truffles out of that batch!  And, I didn't use Oreos, I used the Kroger brand instead, which actually taste just as good and don't cost as much!
On Sunday, I also made Chocolate Covered Cherries. 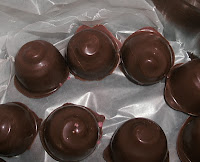 They're actually quite a pain to make, because you have to actually paint the mold and make sure that when you hold them up to the light, you can't see the light through the mold.  Then, when you put the 'juice' & cherry into the chocolate painted mold, you have to make sure you put just the right amount of juice in, or else the chocolate topping won't cover it, and the juice will run out when you take the chocolate out of the mold.  YS started helping me, but gave up.  It does get quite frustrating, believe me.
I had a couple of hours left on Sunday night, so I went ahead and made Peanut Butter Cups.

These are a lot easier than the chocolate covered cherries, because all you do with the chocolate is put some in the mold, then  just make sure the chocolate covers the mold.  The only thing is that I only have 1 mold that makes 11 at a time, and you have to leave it in the freezer for 5 minutes, so it is time consuming. Every year I say I'm going to get a couple more molds, but every year after I put the mold up I forget about it!
Yesterday afternoon I got "in the zone".  I made 3 batches of Texas Millionaires:  1 to give to my next-door-neighbor (who supplies me with the pecans!), 1 to my sister (the one who gave me the scarf- her hubby says mine are the best!), and the rest for us. 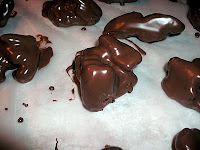 These are another pain to make.  I even got a blister from mixing the pecans in with the melted caramels.  This was an all-afternoon event because I made 1 batch at a time (I've never tried to put 2 batches together; I would think it would really be hard to mix all those pecans in all that caramel).  Oh, but they're so worth it!  Kraft has made it a little easier by packaging "Caramel Bits":  little bits of caramel that aren't in a wrapper.  It's a bit of a time saver.
Next was another new item:  Red Velvet Cookies.

And, of course I had to sample one.  Goodness gracious, they're good!  Again, it didn't make as many as the recipe said it would.  Hey, if you're going to make something, you might as well make it big!
Then, I made some of the peanut butter/kisses cookies.  I usually use a recipe to make the dough, but decided to use the roll of cookie dough. 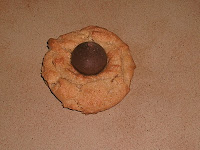 Big mistake.  Oh, it looks okay here, but they just weren't as thick as they are when I use the recipe, and, guess what?  Yep, that's right...they just didn't make very many.
And, just for good measure, I needed to use the bananas that were really ripe: 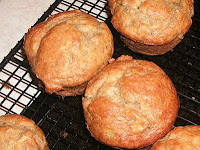 Supper was flatbread sandwiches and left over Chicken Tortilla Soup.  It was a free for all feeding frenzy: 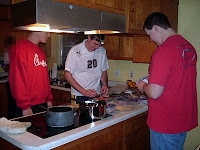 Poor FES stood back.  I don't think he knew what to think!  He'll learn quick enough, though.  He's been coming up every so often and asking if everything is ready.   I haven't been completely torturing him, though.  I've given him (and YS) tastes here and there.
On the agenda for today:  Peanut butter fudge, the Peppermint/candycane cookie from Pampered Chef, and the pretzel/rollo/pecan stuff.  Oh, and a break to have lunch with a couple of sisters and my mom!