How Did We Do?

If you read yesterday's post, I'm sure you're back today to see how the Small Town High School did yesterday evening.  But, before I get to that, I wanted to show a couple of pictures from this year's send off, compliments of one of the senior's moms, Barbara, who allowed me to use her pictures. I didn't go to the send-off since I don't have a son on the team; I figured it's my time to fade into the background and let these parents have their day in the sun.
The send off began at the high school: 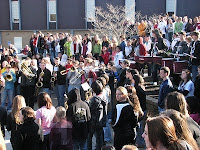 Continued on to the middle school: 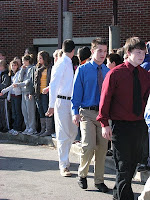 And then continued to the elementary school where the boys were greeted by this sign: 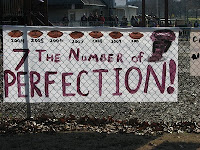 When the game started, the opponent got the ball first.  They made it all the way down to the 11 yard line.  And then they were stopped.  I have to admit, when they marched down the field to almost make a touchdown, I was thinking that we may be in for a battle.  Our defense held them, and the opponent came away with 0 points.
I won't keep you in suspense any longer.  Here's the final scoreboard, with Small Town's score on the right: 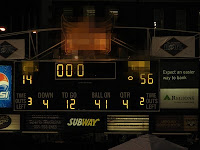 Photo by Adam Briner
Our kicker: 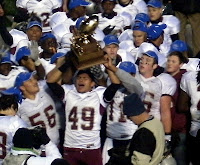 He's come such a long way:  he was thrust into the starting position 2 years ago during the playoffs due to some circumstances that I'm not going to go into here.  He went from just barely being able to kick the ball over the post, to being the 2nd highest scorer in the state. And to top that, he's a good kid, too.
After the game, there's only one place in that town to go:

They have incredible pizza.  We went last year after the game, and by chance, had the same waitress!  She even remembered us, remembered where we sat, and remembered that we had a few other people with us.  (MS came with us; he said it was weird to see the game from the stands, but he was so excited for his former teammates.)  When we were seated, we were at a table next to some of the opponent's fans.  I happened to look over when we came in, and this woman was just staring at me. (This was before I knew they were from the other school.)  I just thought, "How rude" and went on.  It clicked when I knew where she was from.  Our waitress even said that when she came in she was really rude to the hostess.  There's no sense in that; I don't even care if you have money and send your kids to a private school.  (Hope that doesn't offend anyone!)
Anyway, I'm leaving you with one last picture.  This says it all:  It doesn't matter if it's your 1st or your 4th for these seniors, each one is just as sweet:

Photo by Adam Briner
These seniors only lost 2 games in their high school career:  both of those games were to our rival school that has a student body 3 times the number of ours, and who competes for a state championship in their class every year. Yep, I'd say "they done good".
Email ThisBlogThis!Share to TwitterShare to FacebookShare to Pinterest
Labels: football, small town