Lovely Weather For a Hodgepodge

Yes, I stole the title from Joyce.  Isn't that what you're suppose to do?    The questions this week are mostly inspired by the holidays:
1. What does it mean to have the 'holiday spirit'?
Being happy, joyous, and almost childlike.
2. What sits atop your tree (s)? Why?
An angel.  I don't remember where we got it, but to me an angel is all about proclaiming the birth of Christ, regardless of that nasty rumor about the little angel knocking on Santa's door and asking him where he wanted her to put his Christmas tree!  (For the story, see Karen's post.)
3. When was the last time you gave yourself a pat on the back?
Gosh, I have no idea.  I know I do it quite often ('cause if I don't do it, who will?), I just can't think of the last time.
4. Which of your senses is most sensitive this time of year?
Smell.  Nothing takes me back to Christmases past like a smell.  It may be cookies baking, candy being made, peppermint, or pine/cedar.
5. What do you have too much of in your kitchen?
I can't wait to see what everybody's answer is on this one, because honestly, I'm coming up with nothing.
6. What do you do for meals on Christmas Eve and Christmas Day? Big meal?
Breakfast tradition? Open the cookie tins and have at it?
Since my MIL is Danish (or was until she became a naturalized citizen a couple of years ago), we have tried to incorporate some Danish traditions in with my family traditions.  We have a big meal on Christmas Eve, consisting of pork loin, carmelized potatoes, green bean almondine, and rolls (along with other things, but those are the main things), followed by an almond put in someone's pudding.  The Danes use a rice pudding, but, since CH isn't too fond of it, I usually use pistachio pudding.  Whoever has the almond in their pudding gets a prize.  Then, on Christmas Day, I will make a big brunch.  Then I'm through cooking for a while.  We snack during the day on leftovers from the night before, as well as cookies and candy that I made.  (I know this is crazy, but I don't let the boys tear into the goodies until everything is made and put in tins.)  When the boys were little, I used to make a big Christmas Eve dinner, big brunch, and then a big Christmas Dinner, but as I've gotten older, I've realized that there's no reason I shouldn't be able to relax and enjoy Christmas just like everyone else!
The Danish heart that has a place of honor over our dining room table: 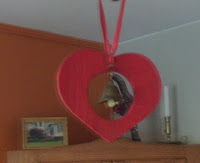 7. What is the best thing about winter?
Being able to put your jammies on early, curl up on the couch with a blanket, and watch old movies.  It's just not the same to watch old movies in the summer!
8. Insert your own random thought here.
The weather's been crazy here in East Tn. this week, y'all.  We had snow that actually stuck on Sunday, got out of school on Monday, the county schools (where I work) were out on Tuesday, and we're expecting another "disturbance" tonight.  Here are a couple of shots from around town:
An unexpected surprise from YS when I went out to my car yesterday: 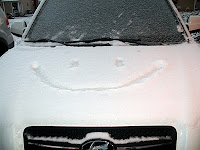 Ducks/geese on the ice; not in the water: 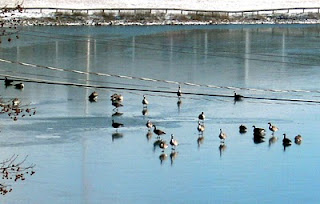 The duck pond (which is in between the middle and elementary schools and next to the swimming pool) frozen over: 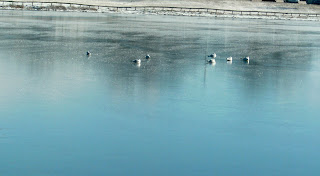 Yep, us southerners are intrigued by things our northern counterparts take for granted:

YS pointed this out to me yesterday.  It's an icicle that's formed under the pipe where the steam from our heater goes out.  Here's a close-up of the top part: 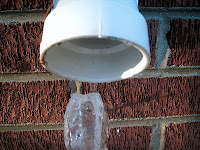