We Know How to Stretch out a Party

This weekend, the company that CH works for had their Christmas Party.  They switch between adults only parties and family parties.  This year was an adult only party.  We had a dinner cruise on a yacht on the river. 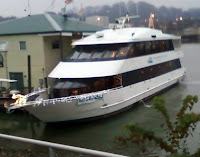 So, Saturday afternoon, CH insisted that we leave 45 minutes to an hour before boarding begins.  (It only takes about 15  minutes to get there.)  I told him how sad it was that we had no life and that we had to get somewhere so early.    We get there and sit out in the parking lot forever for a long time.  Then, CH decides we should start walking down to the dock.  We take our time, and end up walking around the dock and checking out a couple of the boats and basically just wasting time. 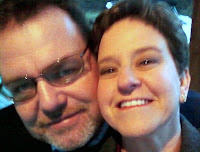 Then, we decide it's time to walk toward the yacht.  As we're walking toward it, we see a group of people walking toward it...with gifts in their hands.  I look at CH and tell him that we don't have a gift...is he sure that we're not suppose to have one?  He said it wasn't in the memo.  Then I ask him if he recognizes anybody.  Nope.  But, he doesn't know everybody in the company, so we didn't think a whole lot about it.  We stand around a few more minutes, and another group comes towards us...with gifts.  Nope, he didn't recognize them either.  That's when I looked at him and asked if he was sure it was the right day.  He checks his calendar on his droid, and started laughing.  We were there a day early!  We laughed about that the rest of the night.  There is a Ruth's Chris right next to the dock, so we ended up going in there and having dinner.  The bad thing (or good, depending on how you want to look at it) is that we had eaten a little something before we left the house since we weren't sure if we were going to have a sit-down dinner or just hors d'oeuvres.
Sunday, we didn't have to leave quite so early, since CH realized it wasn't necessary. 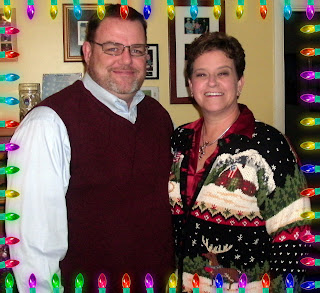 We go there on time, on the right day, and had a great time.  It flurried off and on all day, so there was a nice Christmasy feel to it.  Yes, it's definitely beginning to look a lot like Christmas!
Email ThisBlogThis!Share to TwitterShare to FacebookShare to Pinterest
Labels: CH, holidays