Time for "Friday Fragments" with Mrs. 4444!
~  The church was absolutely beautiful for Midnight Mass on Christmas Eve.  We have a new choir director this year, and he did an excellent job with making the Mass feel extra special.  The past few years have just felt like a mass in the middle of the night.  Here are a few pictures of the church: 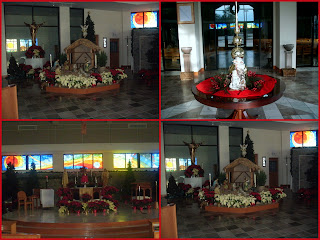 You'll have to imagine the trees in the lower left picture being lit.  They have lights on them, and are absolutely gorgeous.  I took the pictures Monday right before Adoration, so the lights were off.


~  Last night ended up being a "Southern-Themed" night.  We went out to eat, then we were going to go see "Sherlock Holmes", but decided to just go home.  CH & I ended up watching "The Help" followed by "Sweet Home Alabama".  I think I cried more during "The Help" this time.

~  I found a recipe for Eggnog Rum Cake and decided to try it out, especially since I didn't do any baking before Christmas.    The recipe didn't explicitly say whether or not to use the eggs that are on the directions on the cake box, but if you make it, put the eggs in.  I took a chance and put them in, and it came out perfectly.  For the icing, I made my own using 1/3 cup softened butter,  3 cups of sifted powered sugar, 1 1/4 cups of eggnog, and 1/4 cup of dark rum.  After I mixed that up, I ended up adding equal parts of eggnog and rum until it was the consistency I wanted.  At first I was going to make a glaze to drizzle over the cake, but decided against it at the last minute.  The finished product:

I think I may have put just a little bit too much rum in the icing, but then again, is there such a thing as too much rum?  I didn't think so.
~  The boys got me this bracelet for Christmas:

I was a  little concerned when I opened up the box, because I have rather large wrists, but they were smart and got the biggest bracelet they could.  And, it's just a little bit big (in that it slides a bit), but that's the way I like them.  The charms have some significance.  On the left is a bear:  We've always called YS "YS Bear".  The middle charm is a stone for OS, my nature boy.  And the charm on the right is a bunny for MS, my "Snuggle Bunny".  And, since it's a charm bracelet, CH and the boys won't have to think real hard about what to get me for birthdays, anniversaries, and Christmases.

Now I can cook like the Southern Queen, y'all!

When we were in Heathrow for our last meal in England, our server was wearing the most incredible perfume.  She told me what it was, and we looked at it in the airport, but couldn't get someone to wait on us, so we didn't buy it.  I looked around town for it but couldn't find it.  A few weeks ago we were in Ross Dress for Less; I happened to glance at the perfumes, and there it was.  So I got that, too

~  I'll catch y'all next year!  I hope everybody has a safe NYE!
Email ThisBlogThis!Share to TwitterShare to FacebookShare to Pinterest
Labels: ; cooking, family, friday fragments