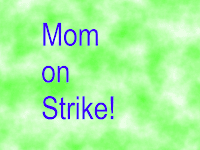 I had a good laugh on Monday night when I turned on Lifetime and saw this movie was on :  On Strike for Christmas.  I fell asleep during the movie, but what I saw depicted exactly how I felt.

Holidays are never what I expect them to be, especially now that the 2 oldest boys are in college.  I always thought that when they reached this age, we would do more things together during the holidays.  Can anyone say "Dream World"?  Definitely not my reality.  I was really hoping that we would have one night together.  Playing a game, watching a movie, or watching a football game.
Wed. night we went out for dinner, then the 2 oldest were off to visit friends.  Even Thanksgiving night they went to friends' houses.  My initial hope was that we could all go for a hike together, as a family.  But, CH wanted to go for a motorcycle ride, MS & YS didn't want to go, and OS slept late.  By the time he got up, I was headed out to the Yankee Candle Shop to see what they had.  So, he & a friend went hiking instead.
I don't think the boys realize how hard I work to make the holidays special for them, so they'll have memories and traditions to pass down to their kids.  Maybe, being boys, they just don't care and/or it just isn't important to them.  I guess we'll see this year, because I'm going on strike.  I had plans to put up the Christmas decorations over the weekend, but because of the attitudes, I rethought that.  In fact, I'm not going to go out of my way to do anything.  If they want it done, they can do it themselves.
I've threatened that in the past, but didn't follow through because I didn't think it was fair to YS, but, now that he's 17, I think he can handle it.
I shed some tears this weekend in the privacy of my bedroom, and I'm just tired of feeling this way.  Maybe my family has always been this way and I just hoped that it would change as the boys got older.  I told the boys last year that all they had to do was tell us what they wanted to do as a family and we would do it.  Did I hear any suggestions?  Nope; not a one.  We are a family of 5 who have 5 different interests.  Guess I should just get over it and realize that this is how we are.

I'm not looking for sympathy; I just wanted to get this off of my chest and feel better about everything.  It won't be too much longer and they'll have families of their own and won't be spending any holidays with us.

So...do you have the "dream family" and spend a lot of time together during the holidays, or does everybody do their own thing?