I thought I was being clever with my post title, until I went over the Susan's blog and saw her title, which is exactly the same.  No, I will not change it, and yes, that's probably where I got the idea!
Susan has provided a list of 25 items to find and submit a picture.  I have a cheap, cheap, cheap point & shoot, so don't use not having a decent camera as an excuse not to play along!
Today's item:  "A List".  I'm pretty organized at work, but I don't really make lists.  The only list I usually make is my grocery list.  I use my calendar to make notes of things I need to do, but I just don't make lists.
I looked around school, and didn't see any hanging on the walls.  I talked to a kindergarten teacher, and she said they don't do lists for Santa anymore since the paper has stopped printing them.  What to do?  I went to the librarian and asked if she had any lists.  She gave me the funniest look; I told her I thought I'd just throw it out there and see what she came up with.  She had plenty of lists, but none pertaining to Christmas.  So, she pulled up a list of Christmas books on the computer: 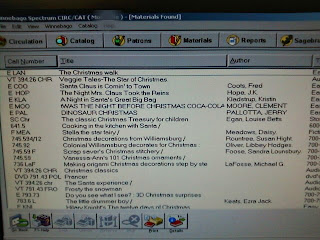 That's not cheating, is it?  :)
Come join in the madness...you know you want to!  Link up with Susan at This Day!
Email ThisBlogThis!Share to TwitterShare to FacebookShare to Pinterest