It was a pretty low-key weekend around here.  CH went to a motorcycle rally called "March Moto-Madness", so YS & I just hung out.  Well, not exactly.  YS and his friends hung out downstairs, & I hung out upstairs.  I read part of a Jodi Picoult book, watched some tv, cleaned some of the house (nothing too strenuous, though!), and just relaxed.
I managed to get prepared for the beginning of the week:

Have I mentioned how much I love the TpT online store?  I have a few things in my shopping cart that I want to buy, but so far I've found enough free things that I haven't had to actually spend money on anything.  Yet.

Before I printed the activities out, I had to figure out how to print things from my phone and/or tablet.  I couldn't get it to work on my tablet, but did figure it out from my phone!  Oh, happy day!  What a sense of accomplishment, and it was fairly easy.  Oh, the reason I had to print it from my phone/tablet was that my adapter for my laptop quit.  It's done it before, but I was able to get it working again.  No such luck this time.  I'm not sure (but I have a sneaky suspicion) that it has something to do with Laika using the cord as a chew toy when she was little.  Have you noticed how you can find anything on Amazon?  I'm expecting a new one in the mail next week.

Friday morning, Pepper wasn't feeling so great, and her belly was making all kinds of noises.  She spent most of the day laying around, and Laika just didn't understand.

She stayed close to Pepper and acted very concerned.  It was pretty sweet.

Saturday I was determined to figure out how to cut scalloped edges on the paper bags that my SIL & I are using for the "thank you goodie bags" for our in-laws' anniversary party.  MS' girlfriend is pretty knowledgeable about things like that, so when I asked her, she told me there are paper trimmers that you can buy that have different patterns.  I went to Hobby Lobby & found one.  After I bought it, my SIL asked if I checked my Retail Me Not app to see if there were any coupons.  DOH!  Of course I had completely forgotten about that!  She checked, and there was a 40% off coupon.  I had already left the store & was headed into Michaels, so I looked in there for a paper trimmer.  It's a good thing I did, because their's was 1/2 the price of Hobby Lobby, and I get a 10% teacher discount, PLUS there was a 40% coupon from there, too.  I ended up spending less than half of what I did at HL, so I took that one back.
When I got home, I did all of the bags I had (which was around 80) in less than 30 minutes.  I had tried to do some with a scalloped scissors, but it was taking waaaay too long and they weren't straight.

I went to Palm Sunday Mass Saturday evening, and sat with my parents.  There was an outdoor blessing of the palms, then the congregation got their palms and we went back inside.  Last year, the Mass I went to  was really crowded, and someone ended up sitting in MY seat when we went back in.  I was not happy.  (I realize this isn't the way you're suppose to act-or feel- during Mass!)  This year, a family sat in our pew, but there was some room on the end for us.  I snapped a picture of this bird's nest in a tree that I saw in the parking lot:

It looked a lot cooler in real person, but I think it's so weird how the Bradford Pears are in full bloom, yet this little tree is so bare...with a nest in it.

CH ended up coming one on Saturday night, I'm assuming he did that because yesterday was suppose to be so yucky.  Laika was one happy puppy!  Here she is waiting her CH to get out of the shower:

Sunday, CH & I went to one of my favorite stores: 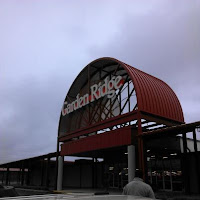 Oh, how I have missed this store!  There was one in Charlotte (actually Pineville) that I frequented, but we didn't have one here.  This one opened up a month or so ago in the big city, but I just wasn't able to find the time to actually go.  I was looking for some kind of "tree" to hang some eggs on, but I left without finding what I wanted.  These eggs aren't just any Easter Eggs, they're "Royal Copenhagen" eggs.  We did get a couple of little candles to use for camping, a container for my kitty litter (for my "luggable loo"), and a cute little basket for school.

That was pretty much the extent of my weekend. Hope yours was great!