Time again for Random Dozen!  YAY, Linda!  Some of these are hard...they're making me think this week!
1. What is your favorite Mexican dish?
When we go out I usually just get a chicken burrito.  There is a new Mexican restaurant in town, and I had a fajita quesadilla...out of this world!  The margaritas were most excellent, too!

2. When you were a kid, did you get started on your homework right away after school, or did you procrastinate?
My parents believed in working first, then playing, which is what I did.

3. What is your favorite store for home furnishings?
I really, really like Hobby Lobby for the finishing touches.  I could spend hours in there, dreaming.
For big furnishings, I don't really have a favorite.  We bought some furniture from this guy when we moved into our house 6 years ago:

4. When you were young, did you like school lunches?
I loved school lunches, especially since I very rarely (like once in a blue moon!) got to buy my lunch.  9 siblings, remember?  Although there were "only" 9 of us in school at one time.

5. Is religion a crutch?
This question is waaaay too deep for me right now!
6. In your region, what is the "big" (most popular in the community or state) high school sport?
Hmmmm...I wonder how many readers/followers out there  would be able to answer this question for me?  (HA!)  Definitely football.  Last year the high school tied our rival high school for the most ever state championships.  We're a 3A school, and our rival is a 6A.  The high school I attended has won state championships in A, AA, and AAA classes.
Here's a picture of the "bling" that's in our house: 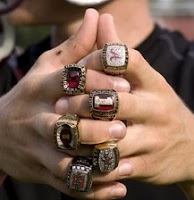 (Photo by Saul Young)
But, what's even more amazing than those rings, is the coach who led the team to 4 of those.  He believes in building the boy into a man.  He has kicked players off of the team who were expected to play major roles on the team for doing things they should know better.  During the football game last Friday, one of our players was ejected for getting in a scuffle (I wasn't there so I 'm not sure exactly what happened) with a player from the other team.  TSSAA says that if a player is ejected, he can not play the next game.  The head coach said that the player may be out for more than one game...that's not acceptable for a player on his team.  I also heard that during a scrimmage, a member of the opponent team called one of our players a cuss word.  Our  player cussed back at him, and the head coach made our player go to the opponent and apologize.  OS & MS were both very fortunate to have had that man help mold them into young men.  It's going to be interesting to see if the team can get their 7th ring in as many years, especially since there's not one of our boys on the team!  We've been here for 6 years, and they have 6 rings.
7. Do you consider yourself rich?
Monetarily:  definitely not.  But, I have my health, and my boys are all healthy and have grown/are growing into nice young men.  So, in that aspect, most definitely!
8. Which of these would you have the best chance for success in administering:
A) CPR
B) Heimlich Maneuver
C) Changing a flat tire
I've been trained in CPR, but would totally freak out if I ever had to do it.  I have no idea how to change a flat tire, unless it would be to pick up my cell and call my insurance to have someone come out and change it!  I think I could do a Heimlich Maneuver if I had to, so I'm going with "B"....final answer.
9. Which dance would you prefer to learn & why:
A) Salsa
B) Hip Hop
C) Waltz
D) Swing
C)  Waltz.  It's so graceful, and I actually kinda learned how to do it when I was in Tx. at a dance in West, Tx.  Of course, it was to country music, so I'm not sure it that would really count!
10. What's the worst news you've ever delivered to someone?
I don't know that I've ever had to deliver bad news to anyone, thank goodness!
11. Name something you learned in college that had nothing to do with classes or academics.
Oh, geez!  How to play beer pong?  Quarters?  Do I need to go on?
On the serious side, I did learn that it's okay to not be dependent on someone.  I learned that it's okay to break ties that may be detrimental to your future.
12. New variation on an old question: If there's a song in your head that just won't get out, what is your favorite (or most repeated) line in that song?
Right now I have the song "Unwritten" by Natasha Bedingfield going through my mind.  Here are the lines that are running around:
"Feel the rain on your skin No one else can feel it for you Only you can let it in No one else, no one else Can speak the words on your lips"


And now for your listening enjoyment, the whole song if you're bored and want to hear it!