Y'all know how husband enjoys riding his motorcycle (aka "the ugly green bike").  2 years ago he and a couple of friends rode to Alaska, making sure they rode to the Arctic Circle.  This year he planned on riding the Continental Divide with those same 2 friends.  About a month ago, his friends told him they couldn't make it for various reasons.  OS had  planned on going with him and spending a few  days with some friends of his who are river guides.  So, what did husband decide to do?  Here's a hint: 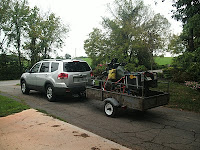 Saturday husband loaded up the car with the ugly green bike in tow, and he & OS headed west. 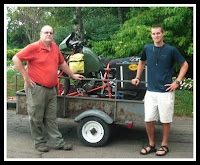 I have proof that they didn't kill each other on the way over, unless some stranger took this picture:

Yesterday was husband's birthday...these are a couple of his  birthday views:

(I told you the bike was ugly!)
When I was growing up, birthdays weren't that big of a deal.  I guess when you have 10 kids, it's hard to make a huge deal out of everybody's birthday.  That being said, when husband said something about not being with the family for his birthday, I pretty much shrugged it off and told him it was just another day.  (Yes, I can be mean that way.)  It looks like  he's enjoying himself.  Prayers for a safe journey would be greatly appreciated!
MS is in his first full week of college life with classes.  He's dropped and added a class and has found something to occupy his time (like he needs anything else):  rugby.  Whatever.  I don't understand it, and don't understand why a group of big sweaty guys would want to get together and hug each other in the middle of a field.   But, hey, if that's what he wants to do...
I did get an amusing text from him today.  It read:  "You have to pay to wash clothes here."  No _____, Sherlock!   (Sorry, there's nothing else can describe that text!)  He just cracks me up!  I have no idea what he thought....this university takes it to you every which way ($250 for a parking sticker if you live on campus is a bit much!), of course they aren't going to let you wash your clothes for free!  Oh, the life lessons he's learning!

As a plus for husband being out of town:  YS made dinner today! We tried something new:  Carne Guisada.  He said next time he'll put in some refried beans for some awesome burritos.  (We believe in eating carbs at our house!)


Okay, guess that gets everybody in a post!  It doesn't happen very often, does it?  Hope everybody is having a Terrific Tuesday!