As Fall Break comes to a close, I wanted to share with you the faves for last week:
1.  Meeting new friends at the Rugby Reception.  Everybody was so incredibly nice and they made a point to come up to me at the match on Saturday and say hello!  I love making new friends!
2.  The high school football team wearing pink socks for Breast Cancer Awareness:
(I have no idea who to credit with these pictures; they were on the football team's Facebook page.) 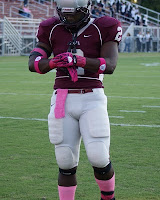 Even the students who go shirtless and write letters on their bodies got into it: 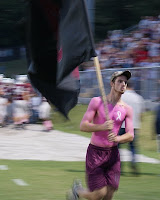 One of last year's football players' mother past away a couple of weeks ago from breast cancer.  From what I understand, it was the boys' idea to wear pink, and, if I'm not mistaken, they will be wearing them again for the next game.  What a great group of boys!

3.  A nice surprise:  Tuesday MS came home to do laundry (yes, he did it himself!).  He had to go to practice before they were finished, so he brought 3 friends with him for dinner when he came back to get his clothes.  I know I've said this before, but it's really nice to see that he is choosing good boys for his friends.  (Maybe we did do something right with him!)

4. Another nice surprise:  Thursday OS called to let us know that he's coming home this weekend!  All boys under the same roof for 1 night!

5.  Some major catching up on sleep.  And with the cooler weather, there's been some really good sleeping temps this week! 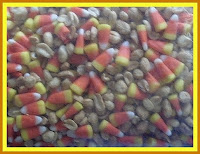 If you haven't, be very, very careful.  It is addictive.  Dry roasted peanuts mixed with candy corn.  The mixture of salty & crunchy with sweet & soft.  It tastes a lot like a Payday candy bar without the chewiness of the caramel.

7.  My princess went to the "beauty parlor": 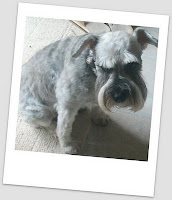 We know it's time for her to get groomed when she gets "velcro toes".  That's when her toenails get stuck/caught on the rugs.

After I dropped her off, I saw a little dog that looked a lot like a schnuazer, but her coat felt a lot coarser than Ally's.  Her owner said that they found her on the side of the road when she was a puppy.  It's so sad that people actually do that.  She was such a cute, happy, friendly dog.  Then, when I was going in to pick her up, I ran into another really cute little  dog.  She was a Brussels Griffon.  Talk about cute and friendly!  Here's kind of what she looked like:

I had never heard of that breed before, but she looked like a cross between a schnauzer and a pug.  Very cute!

8.  (This is the last one...promise!)  The best thing about being on Fall Break is getting a break from a schedule.  Sometimes it's nice to just be able to catch up on blog reading, being able to clean up the blog a little, and relax by watching movies.  Movies watched this week:  Dear John (It's based on a Nicholas Sparks' novel so you know it's gotta be good!), Bounty Hunter  ( a little disappointing, but looking at Gerard Butler is never disappointing!  I missed his accent, though!), and Killers (I thought it was very good.).
Since it's fall and football season, this weekend will be filled with...what else but...football!  YS' band has a competition on Saturday, but it's local.  If I'm really lucky, I'll be able to go, get in free (one of the county high schools is hosting the competition), watch the band perform, then get home in time to see most of the UT/Ga. game!
GO BIG ORANGE!
Email ThisBlogThis!Share to TwitterShare to FacebookShare to Pinterest
Labels: dogs, food, football, MS, OS, Rugby, YS