The weather finally feels like fall!  I love walking into the grocery store and seeing the fall decorations in the front.  I love the smell of fall:  crisp and clean.  I love the feel of fall:  cool in the mornings, warm in the afternoons, changing back to cool in the evenings.  Football weather...definitely.

Here are some of the first signs of fall in the yard:

This is the tree in the front yard that looks like a big stick sticking out of the ground when the leaves fall off: 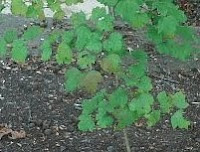 A Dogwood in my neighbor's yard: 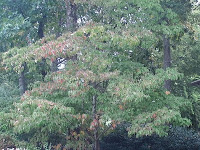 And, I got a few decorations in the planter on the front porch: 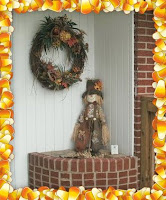 I need to get some mums to put in the planter to complete the decorating for that part.  I usually just keep them in the pots they come in since they need direct sunlight and it won't get very much (if any at all) right there.  Does anybody have any suggestions for a fall plant that needs to be in the shade?

Last Friday I went to the Rugby Reception at one of the coach's house.  Everybody was extremely nice...I'm always kind of nervous when I go to an event like this that I'll just stand there and won't have anything to say to anybody.  The coaches were there to meet everybody when we came in, and then some of the parents came over and introduced themselves.  MS was given one name at birth, but when we moved to the small  town, he told everybody to call him another name since there were already 3 boys in his class with the same name.  His "second" name stuck, and that's what everybody in high school knew him as.  So, when the parents asked me who my son was, I was at a lost.  I wasn't sure if people are calling him Name 1 or Name 2.  And, the coach was no help:  He said they usually just call him by his last name.  So you can see my dilemma.  Once I explained, the weird looks stopped.   Then, I would be asked how long MS has been playing Rugby.  Uh...that would be 4 or 5 weeks.  I think there's only 1 other boy on the team who hasn't played before, and he got a concussion during last week's game.  I'm told that injuries are few and far between, however, another  player (who is on a different team - there are 3 teams in this club) tore some ligaments in the game before that.
Saturday I got to watch my first Rugby Match.  Interesting.  Very interesting.  But, I liked it!  It had a much faster pace than football.  MS is on the "Developmental Team"; hopefully he'll progress to the "Reserve Team" and then the "Varsity Team".  One of the freshmen moms & I met on Friday night, then sat together during the game.  When the Varsity Team was playing, I commented to her that they looked  like  men.  She said, "Yes, they are men...real men.  That's what our babies are going to look like in 4 years."   Exactly what I was thinking. Anyway, the football team may not be doing too well, but the Rugby Teams are all undefeated!  And, MS scored/got/made (not sure what to say!) a Try!  It was so exciting!
Here's a picture of MS during the match/game: 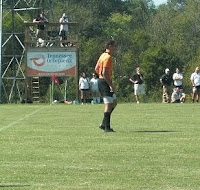 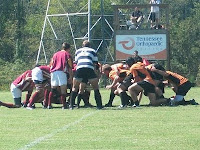 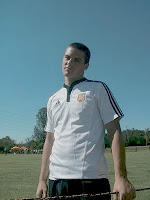 And my souvenir from the game: 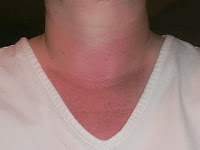 It looks a lot worse than it feels.  It's more of an itch than a hurt.  Mental note:  wear sunscreen on my neck next time!
Recap:  Fall decorations are almost all out, weather is cool (for a couple of days anyway!), I survived Friday night (got condiments ready for the concessions, wrapped a few hamburgers, and went to reception), and saw my first Rugby Match.
Email ThisBlogThis!Share to TwitterShare to FacebookShare to Pinterest
Labels: fall, MS, Rugby