Gearing up for the Random

The Random Dozen isn't until tomorrow, so I thought I would a "practice run"!
1.Do you ever get an e-mail that you just have to scratch your head and say "huh?"?   Here's one I got through school e-mail the other day:
Does anyone have Tuna that they are not going to use?  If so, please let me know I will come and pick it up.
Thank you,
Von
I have no idea what the heck she's talking about, and I was too afraid to ask!
2.  This is what it looks like when I look outside of my room at one of my schools: 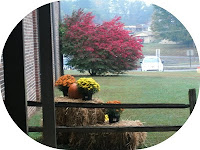 If that doesn't scream "Fall", I don't know what does! (If you know anything about a being a speech pathologist in the public schools, you know that we are usually put into the smallest room in the school, sometimes a closet.  I'm very spoiled fortunate that at one of my schools I have a regular sized classroom.  Not only with a window and a sink, but also an outside door. That's unheard of in the speech pathology world!)
3.  YS got his driver's license last week and has taken over possession of the van.  He has driven to school 3 days so far (plus driving himself to the school to go to a band competition) as well as Sonic on Friday.  We only live a few blocks away from the school and Sonic, so it's really no big deal.  He, however, thought he was hot stuff because he drove to Sonic after school.  I didn't have the heart to remind him that he was only suppose to drive to school & back.  I'm trying hard to cut those apron strings, but it's a lot harder with this one!
4.  During a press conference following the UT/Alabama game, Coach Dooley was asked if they were out of the woods, schedule-wise.  Dooley said, "Are you kidding?  Next week we're playing the team that beat the team that just beat us 41-10.  Do you want to rephrase that question?"  At least he's keeping his sense of humor.
5.  UT did get the better of 'Bama on Saturday afternoon in a contact sport:  UT Varsity Rugby beat Alabama 73-0.  Yes, that's right:  73-0.  The Varsity Team is really neat to watch.  Hopefully I'll be watching MS on that team in a couple of years. 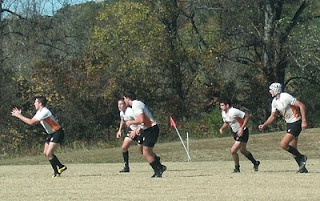 6.  YS' high school band finished their competition season with a "1".  At least they saved the best for last.    I got a call from the director right before he got home:  YS left his phone on the bus.  Great.  After a couple of phone calls to the local bus company and the high school, we determined that it was a lost cause.  Then, when I was on the way home from work yesterday afternoon, YS called.  Another band member had his phone.  YAY!  Sure would've been nice if his mom had called me yesterday to let me know her son had it.  Or maybe she didn't know.  Those of us with sons know what I'm talking about.
7. Did anybody hear about the rookie pro football player who caught a pass Sunday?  He caught it, fell down, and put the ball on the field.  He had not been touched by the opposing team.  A defender picked up the ball  and ran for a few yards.  Poor guy will never live that down.  Ever.
8.  I leave you with this:

And that's all I have to say about that.