Snow days, snow days...when will it end?  Luckily, the school system I work for has 11 snow days built in to the calendar.  Each school day is extended by 15 minutes, giving us those days.  We've already used up 7, and it's only the middle of January.  I sure do hope the rest of winter is mild, but it doesn't look like it will be.
We've had a casualty from the snow. 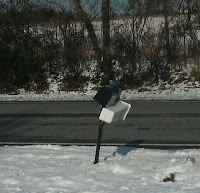 Apparently when the snow plow came through on Monday, he got enough of our mailbox to make it lean.  I called the "city" yesterday, but I haven't heard what they're going to do about it.  They probably have a lot more pressing things to deal with right now.  (CH told me that he had tried to stand it back up before he left for work yesterday morning.)
I had a pretty productive day on Tuesday.  CH worked from home, so I tried to stay busy to stay out of his way.  So, I spent some time on the treadmill.  Then, I cleaned up our bathroom.  There is a company who provides free online CEUs, so I did one of those.  My school system says we have to have so many inservice hours, but they don't provide all of them.  It's up to each employee to make sure that we have extra hours on our own.  And, here's the kicker:  if you go to a conference but it's on a regular school day, it doesn't count as your extra inservice hours.  You can take a personal day and it will, but if you take a professional day, it won't.  I'm not sure I understand the logic in that; when they ask me I'll be sure to tell them!
Back to my day.  I tackled the pantry.  One side of it, anyway.  I feel so much better when the pantry is organized! 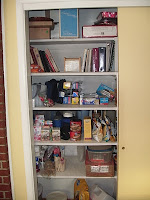 Yesterday I walked down to my parents' house.  I stopped in my next-door-neighbor's driveway to take a picture of my house from a different angle.  I was standing on ice, and, as I took off my glove, down I went.  At least I gave the people in the cars that were coming something to laugh at!  My parents live just down the side-street, and when I looked down their street, I thought it would be better to tackle the trail in the park instead.  I don't think that was the right decision, because I slid a couple of times, but the scenery was worth it. 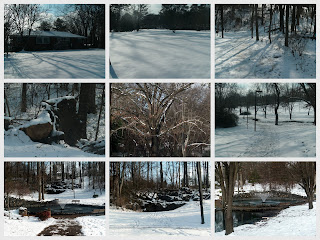 Mom needed a picture scanned to send to one of my cousins' wife, and, apparently, they have no idea how to use their scanner.  She made me some hot Friendship Tea and daddy cracked some pecans for me while I worked on the picture.  (I love how my parents take care of me, no matter how old I am!)  I also helped mom order something online that she couldn't figure out.  (Guess the taking care part works both ways!)  After a short visit, I headed back up the hill to my house.  One of the houses had this sweet snowman in their front yard: 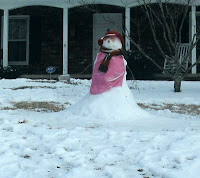 Back inside, I did another CEU online.  (I did mention they're free, right?)  I drank a cup of Via coffee while I was watching the presentation.  There may have been a splash of Bailey's involved in it.  (Now that's the way to do CEUs!)  Then, I was going to settle down with a book, but decided to dust in the bedroom.  While I did that, I told YS & FES they needed to clean their bathroom.  That ended up being a little more time consuming than I thought it was going to be:  apparently FES had never cleaned a bathtub, and had no idea how to do it.  I'm not sure if he thought I was going to do it for him if he told me he didn't know how to do it, but he was in for a big surprise.  I got everything out for him and gave him instructions.  And, he only messed up the shower door in the process; it got off track.    As I was dusting, I ran across a couple of pictures of YS' t-ball days that I just had to scan:

I could get used to not working but still getting paid.  All good things must come to an end.  We'll just see when.
Email ThisBlogThis!Share to TwitterShare to FacebookShare to Pinterest
Labels: FES, snow, YS