This is my most favorite time of a snow day: 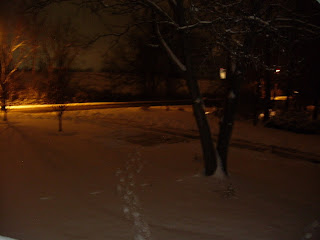 Nighttime.  All of the kids are in from sledding, there are tracks in the snow, and everything is still.  There are very few cars on the road because of ice after dark.  The house is warm and cozy, and the outside lights are shining in the snow.  The hot chocolate has been drunk and the snow clothes are hanging up to dry, ready to go tomorrow.  When school has already been called off for the next day, it's like a weekend during the week.  No worries about having to get up early.
And, maybe the best part about having a snow day on 11 January is that it's the day after the National Championship Game!  Why do they do that, anyway?  Why not have it on a Saturday night so people don't have to worry about getting up for work the next day?  I don't know about other football fans, but by the time the championship comes around, I'm just about over the bowl games.  The game was everything a National Championship Game should be:  the refs let them play and didn't get involved, the score went back and forth through the game, and someone won in the last couple of seconds.  What a game!  And, the best thing:  An SEC team won, and not just any SEC team, one that I like!  Hey, if the Vols couldn't be there, Auburn would be my 2nd choice!
Email ThisBlogThis!Share to TwitterShare to FacebookShare to Pinterest
Labels: football, snow