Yep, that's right:  I shaved my legs!  I know y'all are so happy to know that!  I called the pedi place to see if I needed to get an appointment, and he said they were there, so I could come as soon as I could get there.  I had the whole place to myself!  I guess people aren't wanting to get out still.  One of my coworkers said that her son was going to his first day of class for the semester, but didn't make it out of the subdivision.  And, she doesn't even live in the mountainous part of the county.
Here's what my front yard looked like today when I looked out of the living room window: 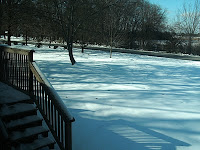 The snow has been on the ground for 3 days.  In Southern talk, that means we're going to get it again.

When we had the Christmas tree up for a few days, I looked at the ornaments and realized that we were missing some of the boys' ornaments that had been given to them, mostly by CH's parents.  I went downstairs and looked through the endless sea of tubs we have, but they weren't there.  I looked in the cabinets in the man cave; they weren't there either.  We decided that either they had accidentally been thrown away, or would eventually show up.  Before OS went back to college, he cleaned out a closet in the man cave.  Guess what he found?  They were in a box, along with a very sticky candy cane.  One of MS' ornaments had broken, but I just super-glued that baby back together, and it was as good as new.  And, as an added bonus, CH found a clothes hamper that had 4 pairs of my shoes in it!  I cleaned them off, and they're ready to go!  It's perfect, because a couple of pairs are black and one pair is brown, and I wanted to get some more black and brown shoes that aren't slip-on.  PERFECT!  And, they still fit!  Maybe with the money I just saved, CH can get a surprise for me!

And, just to totally and completely randomize this post, here's a commercial that cracks me up: