To a non-Catholic, Adoration must seem so very foreign and maybe even a little strange.  But, to a Catholic, it's the most beautiful, wonderful hour you could imagine.  It's an hour of peace and quiet, just you & Jesus.  During Adoration, I've cried, laughed, and even slept.  After the sleeping incident (this was when the boys were little), I talked to my mom about feeling guilty that I fell asleep.  Her response:  Jesus knew that I needed that and He gave me the peace to get some rest.  I was more than a little embarrassed when I went to the car and looked in the mirror: I had a big red spot on my forehead where I had rested my head on my hand.   I just kept thinking about the verse:  "Could you not watch one hour with me?" (Mt. 26:40)  Oh, the Catholic guilt.

There was one time when I came into the chapel out of the cold rain.  When I knelt down, it literally felt like someone put a warm heavy blanket over my shoulders.  It was the most amazing feeling in the world.  There were times when I felt my guardian angels kneeling beside me.  I can't even begin to tell you what that is like.

For Adoration, the consecrated host is housed in a monstrance.  Webster's defines "monstrance" as:
"a vessel in which the consecrated Host is exposed for the adoration of the faithful".  The monstrance is then placed in the "little house"...that's what I call it.  I'm sure there's a proper name for it, I just don't know what it is. 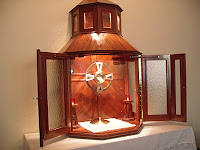 While the host is exposed, Jesus can not be left alone.  The goal is for the host to be exposed 24/7, with someone constantly in Adoration until the next coming of Christ.  When you are in the chapel for Adoration, you aren't suppose to leave until the next person comes in.  However, if you do have to leave for some reason, you are allowed to cover up the monstrance (or, in the case at this parish, close the doors).  When I've done Adoration in the past (in SC),  I only remember covering up the monstrance one time.  When I had to do that, I felt like I was letting Jesus down, like I thought there was something else more important than Him.  I realize that Jesus knew I had a family to take care of, but there still was a twinge of guilt.

Anyway, I had glanced over the Adoration openings in the bulletin for a while, but there weren't any times that I felt like I could commit to.  Then, a few weeks ago, a time that was perfect for me opened up.  Did I sign right up?  Uh, no.  I waited a couple of weeks to see if someone would take it.  No one did, so I figured I'd better start listening.  And, here's the kicker:  It's the same time I had when I started doing Adoration in SC.  Think He was telling me something?

I remember that our Parish had Adoration during Holy Week once when I was in high school.  This was before parishes were devoting a part of the church to Adoration; before Adoration was "big".  Daddy announced that he had signed the family up for an hour.  I was NOT happy.  Seriously.  I did not want to sit there for an hour with nothing to do.  But, honestly, after that hour was over, I felt incredible.  It was sooo worth it.  The worst part was that I had to admit my daddy knew what he was doing.

There is complete quiet in the Adoration Chapel.  Total and complete quiet.  During my hour, anyway.  It's comforting, calm, and peaceful.   It helps me get myself together for the rest of the work week.  It's the best way to spend an hour that I know.
Email ThisBlogThis!Share to TwitterShare to FacebookShare to Pinterest
Labels: Catholic