Valentine's Day is really just another day to me.  It does mean that there are some speech groups I won't have at school because of parties and other activities.   This is the one party that the students can "officially" have.  There are a couple of Valentine's Days from the past that stick out:
3rd Grade:  We ended up not having a party because of a riot at the high school.  Yes, I said riot.  We got out of school early because of the teenagers being stupid.  This was the first year of integration in the Small Town.  As you know, February is also Black History Month.  Are they still calling it that, or are they being politically correct now and saying "Africa American History Month"?  Hm.   Anyway, it was pretty scary when you're 8 years old and you get out of school because of a riot.  I remember being at home, sitting at the table with my brothers & sisters, and somebody (I can't remember which one)  was late coming in.  Mom was worried (Mom is a worrier) until all her chicks were back in the roost.  My second oldest sister (who was a junior) came in with a scratch on her arm.  She ran into a locker on her way out of the school.   I envision the school being crazy, with the students running uncontrollably down the hall, trying to get out.  Was it really that way?  I don't know.  I need to check with my older siblings and get the real story.  I remember all of my classmates thinking it was real stupid of those older kids to act that way.  About the Valentine Party:  I can't remember if we actually had the party the Monday we got back (the riot was on a Friday) or if we were given our Valentines before we left.  I've put the word out on Facebook, so hopefully someone will have a much better memory than I!

Freshman year of college:  The guy I had been seeing & I had broken up, and a very good friend of mine sent me these: 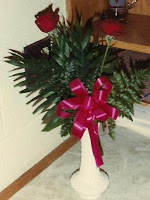 Isn't he a sweetheart?  I think those were the first flowers I had ever gotten from a guy, not counting the corsages from dances.  This friend had broken up with his girlfriend, who happened to be my sister's roommate.  He was such a good friend, but, unfortunately we went our separate ways after a year or two.  I actually ended up seeing a good friend of his for a while, but the guy's girlfriend kind of put a stop to that!  (OOPS!)  He actually ended up being a good friend, too.

I try to make Valentine's Day quasi-special for my boys.  I usually get them a little heart of chocolates and some Valentine's Boxers, but decided to change it up some this year.  I sent OS some cookies, took some brownies to MS, and made some cookies for YS. 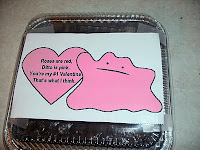 After hearing endless whining some complaints from CH, I mixed up some made-from-scratch brownies for him.  All 3 boys also got a brick shaving bar from Boll Weevil Soap Company. 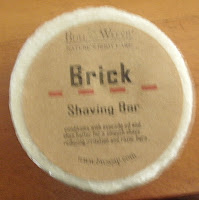 (Sorry for the blurry picture:  cheapo camera!)
This scent is a really manly scent, in my opinion, anyway!  Hope they like it!  MS got his yesterday, YS got his this morning, and OS will get his as soon as it gets to the post office at school.  Hope the cookies get there without being all crumbled up!  I have the hardest time getting anything for CH.  Last year I think I got him a package of pistachios.  Big spender, huh?
How are you spending Valentine's Day?
Email ThisBlogThis!Share to TwitterShare to FacebookShare to Pinterest
Labels: holidays, MS, OS, valentine's day, YS