I don't know about y'all, but October is a busy time in our house.  It seems like we have something every weekend.  We were gone the first 2 weekends to London, then the next weekend CH had a class, YS went to Oktoberfest, and I went to MS' fraternity family day.  This past weekend, YS had a band competition near the university where OS is at school.  I went up early (since it was OS' birthday) to spend some time with him.  Being on that campus with the leaves changing brought back some great memories.  I love that campus in the fall.  Really beautiful! 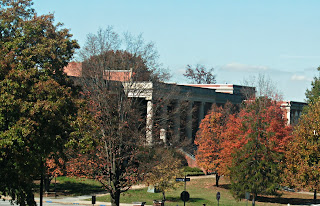 When I got there, we went by an intramural football game that OS' fraternity was playing.  No climbing on roofs for me this weekend!  After that, we went to get a phone for him, followed by lunch.  He took me into his dorm to see his room, and I was pleasantly surprised.  The dorm has been renovated, and it looks pretty good.  He and his roommate have loft beds (basically just a top bunk), so they have room under the bed for a desk.  OS has enough room to have a love seat.  It looked a lot better than when I was a student there, that's for sure!
After that, I drove to my sister's house, who lives nearby.  We chatted for a while, then we drove over the stadium where YS was participating in a marching band competition.  The venue was really neat: 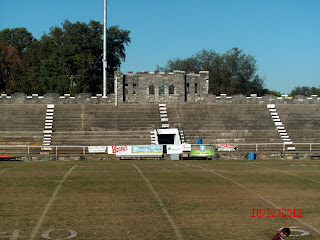 The contest was called "Music in the Castle".  The stadium is on the National Register of Historic Places.  It opened in 1936 (doesn't sound so old after my London posts, does it?), and was built as part of Franklin Roosevelt's New Deal.
One of the highlights of the day:  I met up with a friend of mine from college.  We lived across the hall from each other as freshmen (although I really didn't remember this...I thought we lived down the hall from each other).  We lost touch our sophomore year, but reconnected during our junior (or maybe senior) year.  She ended up being a little sister for the same fraternity that I was, AND, if it wasn't for her,  I wouldn't have met CH.  We kept up through the years, but hadn't seen each other since graduation.  (We're not going to talk about how long ago that was!)  Her daughter's high school band was playing as exhibition.  It was just like old times...those years just melted away and it was like we had seen each other often.  I got my sister to take a picture of us, and my friend made me promise not to put it on FB (I kept my promise), but my sister told her that I'd post it on my blog.  My friend didn't say not to, so here it is: 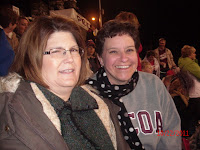 The Small Town's band came in 2nd out of 3 bands in their class.  I'm not sure how they divided up the classes, because I think we were the smallest or next to smallest band that was there.  The band that came in first did a "gimicky" show.  The band didn't play a whole lot; they had a fiddle, oboe, and guitar hooked up to speakers.  When the band did play, you could barely hear them because the speaker was up so loud.  Weird.
The band that my friend's daughter is in was HUGE.  They had almost as many guard members as we have in the whole band.  And the sound that came from them was amazing.  That was the best band I've seen in a LONG time; maybe even ever.  If you catch the Macy's Thanksgiving Day Parade this year, you might catch a glimpse of them.
After the contest, my sister & I went back to her house to thaw out.  Sunday morning we went to IHOP, and then to Bed, Bath, and Beyond.  LOVE that store!  I could spend hours in that store.  I was going to go back by the university to pick up a bin from OS, but he said he decided to keep it.  So, I headed back down the road.
All in all, a great weekend!
Email ThisBlogThis!Share to TwitterShare to FacebookShare to Pinterest