Getting on the train to Wimbledon was easy.  What wasn't so easy was trying to figure out where to get off the train.  I had a book that said to get off at the Southfields Station, but there were a couple of stops after that:  Wimbledon Park and Wimbledon.  Luckily, there was a very sweet young lady on the train with us who was very helpful.  She advised that we get off at Southfields unless we wanted to do quite a bit of walking.  Here's what we saw when we came out of the station: 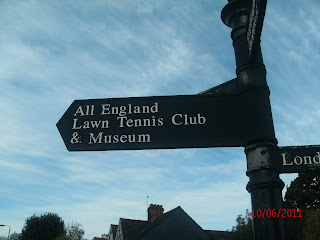 I was already excited, but this just bumped it up a notch!
We had about a 15 minute walk from the station to the gate.  CH didn't really care about going on the tour, so he left me at the gate while he strolled around the area.  This was the view walking to Wimbledon: 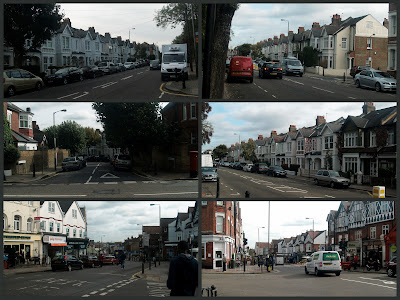 And then I saw it: 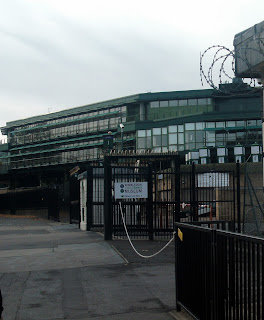 The tennis mecca.  I couldn't believe I was actually there.  I watched Wimbledon ever since I was little and dreamed of one day seeing it.  While I was waiting for the tour to begin, I met a really nice Australian family who were on the last leg of a European tour.  How much could that cost for Australians?  And how do they have the money to do that with 3 kids?
I just stood outside of the museum and took it all in. 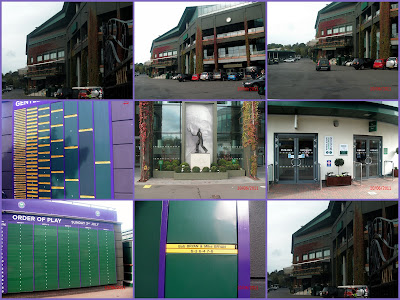 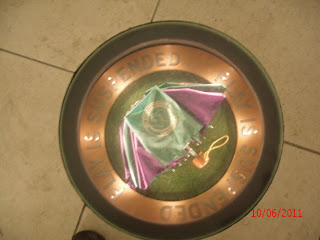 When the tour started and the guide started talking, I have to admit:  I had a couple of tears in my eyes.  Never in my wildest dreams did I ever think I would be walking on that hallowed ground.
First, we went to Court 1. 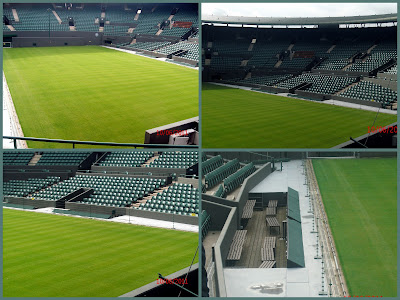 Notice the electric fence in the lower right corner picture.  They put the fence up in the off season to keep the foxes from doing their business on the court at night.
Then, we were on our way to Henman Hill.  If you know anything about Wimbledon, you know that this is where they have the huge screen so that the people who are able to get into the park, but can't get tickets (or can't afford them!) can watch what's going on.  This hill is packed with people watching the matches.  The guide said that one year she was on the hill, and there were some people who had tickets on Centre Court who preferred to be there instead.  The atmosphere is really something.
Before we actually got to go up the hill, we had time for a photo op: 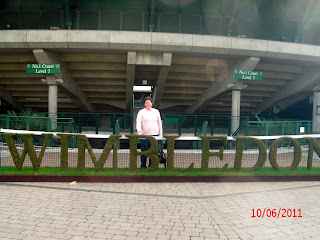 Then, we got to go up on Henman Hill. 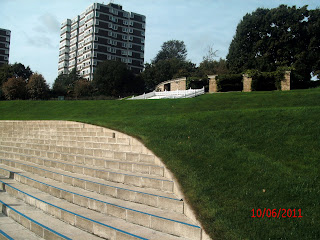 The apartment building in the background is situated so that there's no "freebie views" onto the courts.  Amazing, but true!
Fortunately, it was a clear day, so we had some nice views: 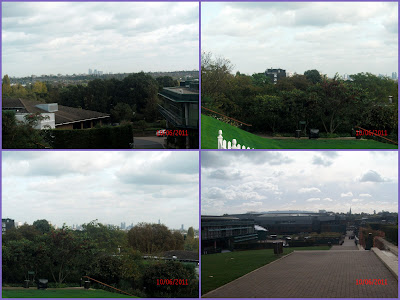 Henman Hill was the one place we were allowed to get on the grass: 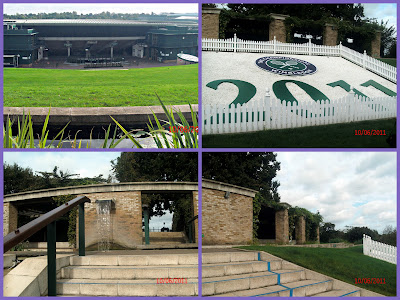 Then we were on to the Press Centre: 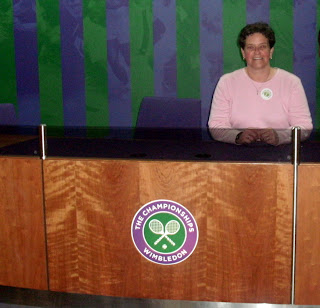 We got to go by Court 18, where the longest match in Wimbledon History was played: 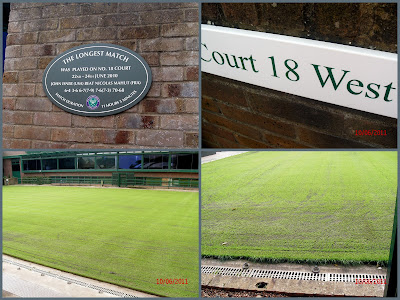 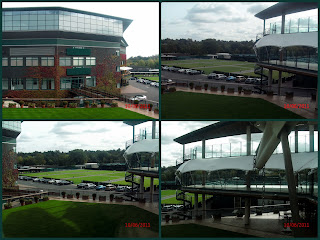 We got to see the "Green Board" on the way to Centre Court.  The Green Board lists all of the champions: 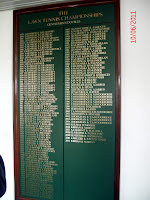 Then, on to Centre Court.  (Cue the angels singing here)  The Royal Box with the door that the players come through: 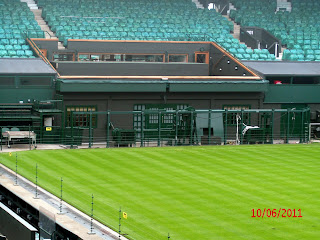 The score board from this year's finals will stay up until next year's tournament. 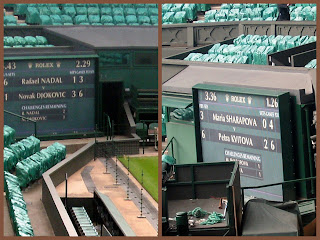 And, the ever popular retractable roof that suspends play for 45 minutes to an hour when they have to close the roof during a match: 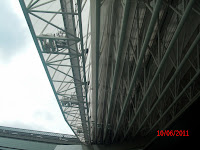 After the tour, I walked back up to the train station, found CH, and we went to the Army Museum.  It wasn't very big, but it was interesting.  No pictures allowed in the museum, though.  It was a bit out of the way and not crowded at all.  I learned quite a bit about the British Army and the wars that they had participated in.
Then, we went to St. Paul's Cathedral.  Man, oh MAN, I wish I could've taken pictures in there!  Breathtaking.  We were there for part of Evensong.  One of the most beautiful experiences I've ever had.
We took a walk on the Wibbly Wobbly Bridge.  It was pretty wobbly that evening because of the wind.  The sights were gorgeous, though: 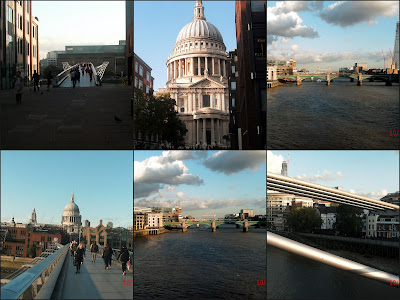 We took a walk along the bank of the Thames, also called the "Queen's Walk" (although our friend said that people don't really call it that!).  We saw the reconstructed Globe Theater, a really cool skateboard area (it was cool that the graffiti was confined only to that area), and some awesome sand sculptures. 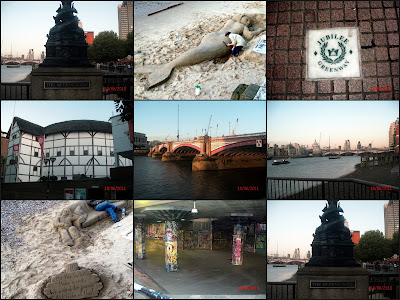 We walked over the Hungerford Bridge and found an Italian Restaurant across the street from where we ended up.  Great Calzones, although the restaurant was pretty tight; they had a lot of tables in a small area.  Then, we walked (and walked, and walked) until we found Buckingham Palace.  I was surprised at how close you could get to it, and that the gates were opened.  (Obviously the Queen wasn't there...guess she forgot we were stopping by!) 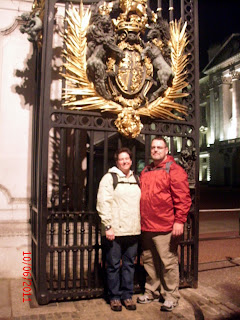 We walked back through Trafalgar Square, and CH noticed that the door to St. Martin in the Fields was open.  There was a concert going on, but we were able to peek through the door.  Beautiful.
So, we had another full day and saw some things that I didn't think I would EVER see.
Email ThisBlogThis!Share to TwitterShare to FacebookShare to Pinterest