If you're looking for my London post, click here.
1. How do you typically react in a sudden, extreme, pressure-filled crisis? Would we want you nearby in an emergency?
Hmmm...probably not.  I guess it would depend on what it is.  If it involved blood or other bodily fluid, a big, definite NO.

2. Caramel apple-caramel sundae-caramel corn-caramel macchiato...of the four, which carmel treat would you choose?
Caramel Macchiato.
3. Is there such a thing as destiny? Explain.
I think God has a plan for your life, but it's up to you to choose to follow it.
4. What's your favorite piece of furniture? I'm referring to something currently in your possession as opposed to something on your wish list.
My bed.  I LOVE my bed.  Especially on cold winter nights when I have the down comforter over me.
5. Wednesday night marks the start of the 2011 Baseball World Series. Did you know? Do you care? Will you be watching? Ever been to a professional baseball game? If you're not an American do you find the title 'World Series' annoying or amusing?
I had no idea.  I seem to remember hearing that the Cardinals and the Rangers are playing...is that right? Obviously I don't care.  Baseball is the most boring sport in the world to me.  I went to a Braves' game once, back before they won the Series in the 90's.  That was exciting; we were living an hour north of Atlanta, and everybody had Braves' Fever!  There was an awful lot of coffee drunk that week at school!
6. A sound that takes me back to my childhood is____________.
Children playing outside in the summer.  That takes me back to playing Hide 'N Seek, Kick the Can, and Roly Bats.  The kids in the neighborhood would come to our house  and play.
7. On average, once you've linked your hodgepodge post to mine how many other participant blogs do you visit? Do you ever come back to the Hodgepodge later in the day or even the day after to read posts?
I try to read as many as I can, but there are "regulars" that I always read; probably around 10.  I always try to get to the ones who read my post and commented.
8. Insert your own random thought here.
MS' fraternity had family day last Saturday before the football game.  CH was taking a class, so he couldn't go.  YS was in Helen, Ga. for Oktoberfest with the German Class.   I hold the title of being the only mom to get up on the roof, only to have to get down about 20 minutes later when the police came by!  (As I was climbing down, I thought, "This could be bad"...good thing it wasn't!)   It was nice to meet his "brothers", but I was a bit surprised that there weren't more parents there.  Only 2 local parents (counting myself) were there, and there was a family from Md., and 2 from Ohio that were there.  It was a beautiful day, and the boys were all very sweet and respectful.  I stayed until about 30 minutes before the game, then I headed home.  I was able to miss most of the traffic this way, and watch the game on tv. 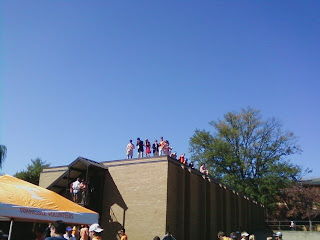 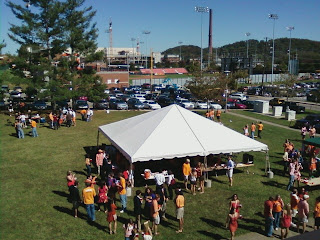