Tues. morning we took the hop on/hop off bus to the Tower of London.  On the way, we saw this really cool photo op: 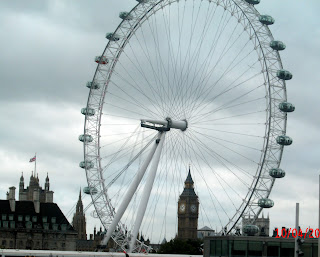 We spent about 3 hours wandering around the grounds of the Tower.  Something I didn't know:  The Yeomen Warders (aka:  Beefeaters) actually live on the grounds.  No way could I do that, not with everything that happened within those walls. We even overheard a little girl (she was around 3 or 4, I would guess) say, "I don't like this place."  There was just something in the air there that something bad happened there. 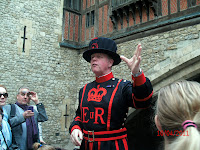 It was pretty cool to see the actual spot where the beheadings took place: 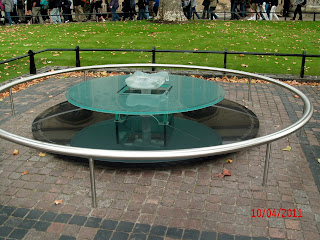 Even more cooler was seeing the etchings on the wall where the prisoners were held.  Amazing that they're still there, after all these years: 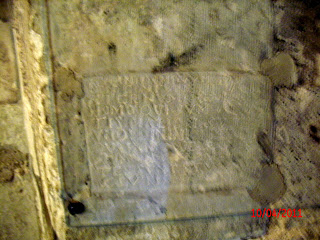 We saw the crown jewels, but, to be perfectly honest, they were just a bit disappointing.  When we were in Denmark, we were able to go into the vault to see the crown jewels as well as a lot of other "bling".  And, you could take pictures.  Here....no.  And, the only things that were in there were the crowns and some sceptors.  There wasn't that much, either.  Disappointing.
We learned that there always has to be 6 ravens in the Tower, or else the monarchy will fall.  So...there are actually 8 right now, and their wings are clipped. 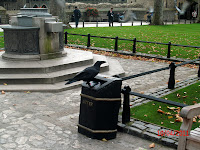 Also on the grounds are the remains of a Roman wall.  When you're there, you tend to forget that the Romans once occupied part of what is now London. 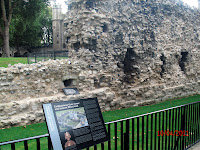 And then there's Traitors Gate.  It was so eerie, imagining those people who came through that gate not knowing what their destiny was. 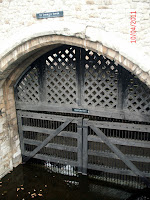 And, of course we took advantage of a great photo op: 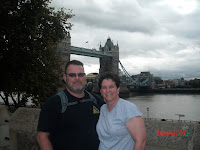 We went by All Hallows By the Tower.  This was the church where Thomas More's body was taken after he was beheaded, where William Penn was baptised, and where John Quincy Adams was married.  It was bombed during WWII; only the tower and walls remained.  While walking into the crypt, part of the floor was a Roman street.  It was an amazing building: 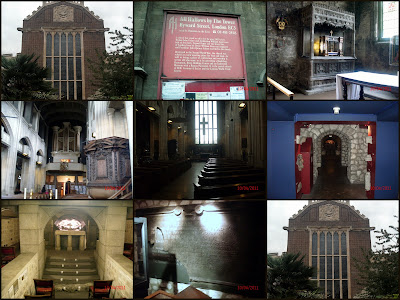 After we left, we took the boat down the Thames to stroll by Parliament and Westminster Abbey.  We weren't able to go into the Abbey or to St. Margaret's, but just walking around the site was amazing. 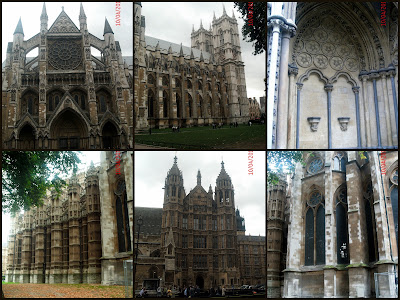 From there we walked up to Trafalgar Square.  On the way, we ate at Lord Moon of the Mall.  This pub was recommended by a friend's husband, who is British.  It was the least inexpensive pub food we had while we were there, and it was the best.  Joyce told me to make sure to try the Sticky Toffee Pudding:  SPOT ON!  Oh my goodness was it good!
I don't know why, but Trafalgar Square was one of my favorite places.  We didn't have time to go into the National Gallery, and I only got to peek into St. Martin in the Fields.  We did go down into the crypt of the church, which has been turned into a cafe.  I was a bit disappointed to learn that all of the bodies that were buried there are no longer there. 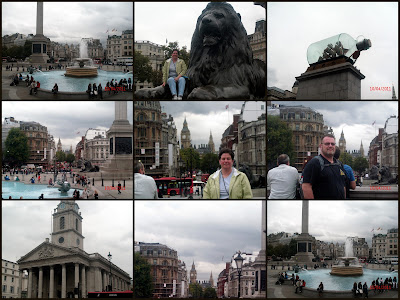 We had a good time just sitting on the steps of the church and people watching.
Some of the sights from Day 3: 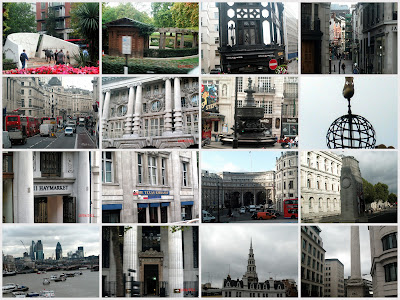