We were up and at 'em early on Monday.  Our mission:  To buy passes for the Hop On/Hop Off Bus.   We walked to Kensington Gardens and figured out how to get one of the rental bikes from the rental bike station.  It's a self-serve docking station where you put in your credit card, and you can "borrow" a bike for either 24 hours (£1) or 7 days (£5).  It took us about 20 minutes to figure out how to use it; you have to put your credit card in twice to get the code to get the bike out of the docking station.  We finally got our bikes, and we rode through Kensington Gardens and followed the outside of the gardens to Hyde Park.  We got this treat as we were riding:

We even got adventurous and rode the bikes on the road for a short while.  We found another docking station and parked the bikes, then walked to a Big Bus Stop just up the street from their office.  Come to find out, you can buy passes at any of the Big Bus Stops as long as there is an attendant.  And, there was a stop not far from our hotel.  Oh well; if we had gone to that one, we may not be able to say that we rode bikes through Kensington Gardens!
We hopped on the bus and enjoyed our first view of Parliament.  What an impressive sight!  Such a beautiful building and HUGE.  Pictures just don't do it justice.  This was my first look at Parliament: 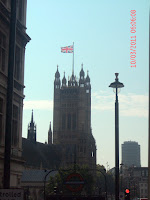 My first impression of the Tower of London:  It was so surreal to see the Tower and think about everything that happened there.

The Tower Bridge wasn't what I was expecting.  For some reason, I had no idea that the bridge's detail was blue. 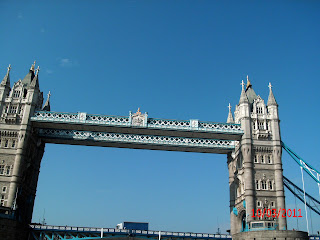 We hopped on the city cruise boat that went along with the Big Bus, and headed up the Thames toward Greenwich.  This is the view of Greenwich from the river:

We toodled around Greenwich and saw some beautiful sights: 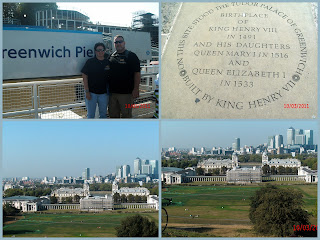 When we got there, we had to walk through a university area to get to the Museum, Queen's House, and Observatory.  CH asked one of the security guards to recommend a pub, so he suggested this one: 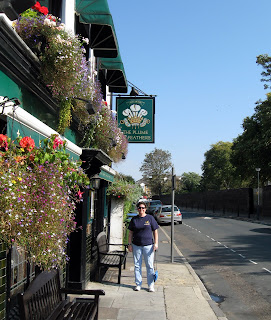 I loved how the pubs have flowers outside of them.  So quaint & cozy!
We walked across the street to the Queen's House.  Renovations were going on with the exterior, and there wasn't much inside.  So, on we went to the Observatory.  Once we got up the hill, we saw the Prime Meridian Line.  There was a charge to go inside and actually straddle the line.  I didn't think it was worth paying just to stand on a line in the concrete, so I just took a picture of it through the gate: 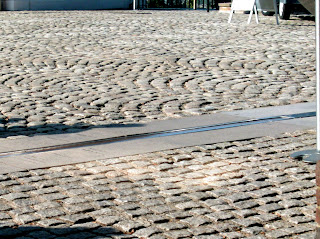 We walked back down the hill and visited the Maritime Museum.  Or, rather, CH visited it, and I sat down and waited on him!
That night, we went to the Ace Cafe.  Interesting history:  It opened in 1938 as a roadside cafe, but it's proximity to a new "highway" brought in motorcycles.  An onsite gas station was then built, only to be heavily damaged by bombing during WWII.  When it reopened in 1949, it boasted "state of the art" equipment.  The cafe closed down in 1969, after playing a role in the 1963 movie "The Leather Boys".  It has since reopened, and apparently, is the mecca for motorcyclists. 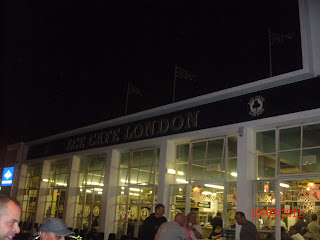 Let me back up just a minute.  I had pinned the Ace Cafe on our google map, and it didn't look like it was very close to where we were staying.  CH thought it was close by.  I told him that I didn't think he realized how expensive a cab ride out there was going to be, but that was how he wanted to get out there.  Interesting ride out there:  the cabbie's father and brother had gone out there before, and, since his gps wasn't working, he called them for directions.  CH ended up using his gps to tell the cabbie where to go, and we had a nice little £25 cab ride.  We sat down, had something to eat (best grilled cheese sandwich EVER!), CH took a look at the bikes and talked to someone for a while, and then we walked to a nearby train station and made our way back to the hotel.  Next time we'll know to take the train!
Here is a collage of the sights during our second day: 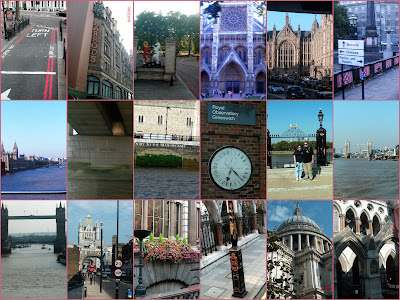