What a weekend!  My Friday School always has a costume parade before Halloween, but only for the Kindergarten children.  All of the other grades line the halls and clap as they come by.  Here are a few pictures: 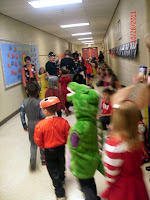 Friday was cold and rainy, so I opted out of the football game.  I spent the evening baking for the band competition we hosted on Saturday.  (More on that tomorrow.)  This was the first time that the school we played has ever beat the Small Town.  After winning the state championship for 7 years in a row, it looks like the reign is over.  This is a different team:  I don't know if they've just become complacent, don't care, or don't have the talent as in the past.  I guess all good things must come to an end!  It would be nice to not have to make decisions about Thanksgiving based on a high school football game.
Saturday was our band competition.  We had 20 bands compete, and things went pretty smoothly.  We had planned on setting up tables on Friday night, but since it was raining had to wait until Saturday morning to do that.  Things were pretty hairy Saturday morning, but somehow everything came together.  We stayed pretty busy once things got rolling.
Sunday we were invited to a Halloween Party.  YS is friends with their oldest.  They have a party every year for the kids, and the kids usually go trick or treating, but since today is Halloween and it's a school night, they thought it would be more enjoyable to have it on Sunday evening instead.  The kids had a lot of fun: 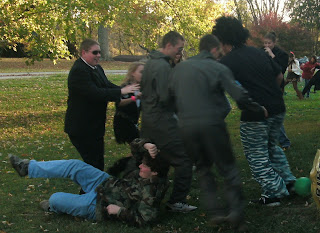 (That's YS on the ground)
They played a game where everyone tied a balloon around their ankle, then they would try to pop each other's balloons.    This was my favorite costume of the night: 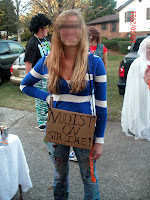 My contribution to the treat table: 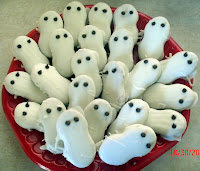 I saw them at the band competition last weekend, and thought they were really cute.  They are just Nutter Butter Cookies dipped in white chocolate with mini chocolate chips for the eyes.  Really easy!
Tonight will be just another night.  We don't get trick or treaters because we live on a busy road, so it should be a relatively quiet night.  Tomorrow will be interesting though; hopefully the kids will be off of their sugar high!
Hope everyone has a Happy Halloween!
Email ThisBlogThis!Share to TwitterShare to FacebookShare to Pinterest