London, Getting There & Day 1

Click on any of the pictures for a better view!
The trip over the big pond was uneventful.  We had an older plane flying from DC to Heathrow, so the seats were a little tight.  I was a little perturbed that the movies hadn't switched over to October; they were showing some movies that I wanted to see, but they hadn't switched over yet.  Bummer.
We took the Heathrow Express from the airport to Paddington Station, then a quick ride in a black taxi to our hotel.  I was amazed at how much room was actually in those little vehicles.
We had a very easy check in at the hotel.  After reading the reviews of the hotel online, I requested a room on at least the 2nd floor.  The reviews said to not get a room on the "lower ground", i.e., basement.  Guess where our room was?  Yep, basement.  When I told the guy that I had requested a 2nd floor or higher room, he said that I could check back in the morning to see if there were any rooms available.  They sent us down a maze to the basement, down to our room.  Our room was tucked away in what seemed like a corner of the building.  I had a concern about the bed being a "double bed".  CH & I are not little people, and I had visions of us trying to get on a twin bed to sleep.  Luckily, the bed was actually like 2 twin beds pushed together, so we had plenty of room.  Our room also had a small kitchen with a refrigerator, stove with 2 eyes, microwave, and an electric hot pot.  The room was clean and cozy.    There was a fouton kind of couch in the room as well, which could have been taken out to give you more walking room.  Still, it was good for 2 people.
The bathroom was small, but who needs a big bathroom when you're only in the room to sleep & shower? 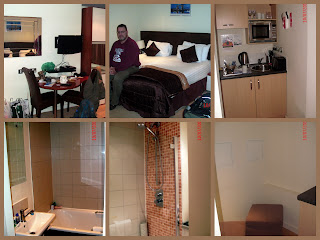 Sunday was our first full day in London.  We had already decided we were just  going to stay close to the hotel, and explore that area.  The first thing we did was find the Catholic Church, which just happened to be not far from our hotel.  Guess what was right across the street from the church?

We had some time, so we popped into Starbucks before we went to Mass.  We found out a piece of history of the church:  The church didn't start out as a Catholic Church.  I don't know the year, but the church was put up for sale.  A priest showed interest in buying it, but was turned away because he was Catholic.  They ended up auctioning the building, and the priest showed up without his collar to bid on it.  And, he won. 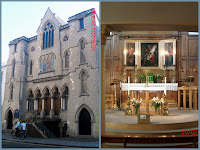 During Mass, Communion was interesting.  Here, we queu in a nice, orderly fashion, according to pews.  It was a complete free-for-all.  Everybody jumped up and made their way to the altar.  And, only the Body of Christ was presented.  I missed the Homily because my latte kicked in and I had to go back to Starbucks to use the "facilities".  I made it back just as the Priest was finishing up.
After Mass, we walked down the street to Kensington Gardens.  Disney was having some kind of princess event, so there were a lot of little girls wearing tiaras and princess dresses.  The temperature was around 80 degrees, so there were people everywhere enjoying the sunshine and warm weather.  We walked by the Round Pond where there were a couple of model sailboats sailing in the water.  We saw the Sunken Gardens at Kensington Palace, but the Palace itself was closed except for one exhibit.  We left that area of the park just before some parade started. 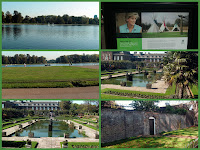 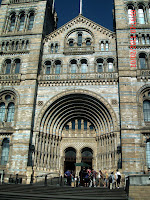 Turns out it is the Museum of Natural History!  BONUS!  We went in, found lunch, and saw some cool stuff. After we spent quite a while in there, we walked back up to Hyde Park.  And, we walked all through Hyde Park.  That is one big park, let me tell you.  We found Princess Diana's "Fountain", which wasn't really a fountain at all, but a large, oval stream bed.  There were so many people there, that we couldn't even see the actually bed.  We walked around the Serpentine.  The swimming area was "closed", but there were people climbing over locked gates to get in to swim.  We continued on through Hyde Park, took a rest under a tree, then made our way to "Speaker's Corner".  We were surprised that, even though there were a lot of people there, and one of the speakers was having a spirited go at it, it was orderly.
We walked out of the park and went to our first pub:  Bayswater Arms, which was close to our hotel. 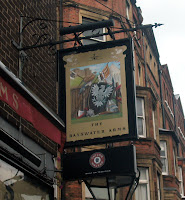 I had my first fish & chips, which didn't impress me at all.  I don't know if it was just where we ate, but the breading on the fish had no taste at all.  I told CH that I needed to go to the kitchen and tell them about cornmeal and seasoning, but he said that they came up with the dish to begin with.  Whatever. 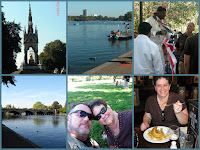 That pretty much concluded Day 1.  Lots of walking; not quite the "relaxing" day that we expected to have for our first day!  We saw something very interesting, though:

There was a couple sitting in the window, getting a "fish pedicure".  I don't think I could sit there and let fish suck on my feet.  Very interesting, indeed!
Come back tomorrow for Day 2! 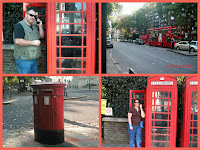