London: Half Day and Final Thoughts

Saturday morning we woke up and wanted to do some last minute things.  On our way to the bus stop, we went by a church that we had walked by just about every day.  As we walked by, I said something about wishing it was open so we could see inside.  Weeeeell, it was OPEN!  And, it did not disappoint: 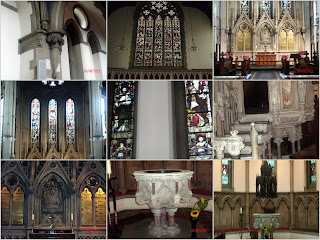 We took the bus to the Marble Arch to see where  Tyburn Tree was: 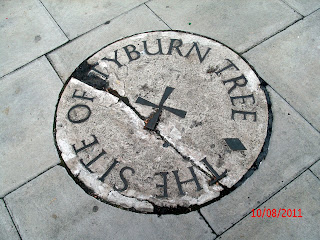 I didn't know what Tyburn Tree was until the Big Bus Guide clued me in:  This is where the public hangings took place.  Before the person was hung, they would be taken down the street in a wagon, and were allowed to stop at a pub for one last pint.  This is where the saying "One for the Road" came from.
Then, we walked over to the Marble Arch to get a picture of the Jelly Family Sculpture.  Next to the sculpture is a fountain that gets cleaned every morning. 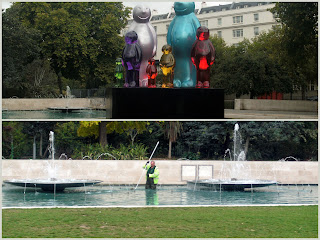 From there, we went by Speaker's  Corner in Hyde Park one last time.  I think CH really liked that area.  Unfortunately, it was Saturday and things don't get jumping there until Sunday. 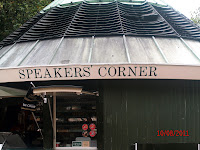 We walked through part of Hyde Park, then took a bus up to the Italian Gardens in Kensington Gardens.  We didn't get to see much, because the gardens are undergoing some (what looked to be) major renovations.  We just sat on a bench and took London in. 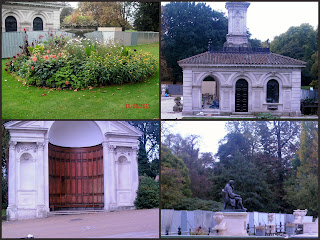 We saw some unusual/cute water fountains that we hadn't seen before: 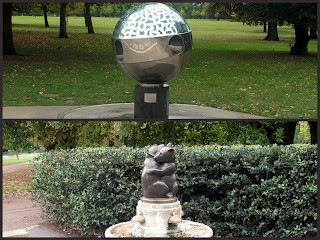 We saw a plaque to William Forsyth, who developed the Forsythia.  You learn something new every day! 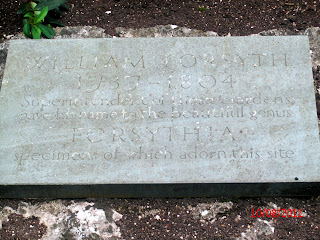 As we walked back to the hotel one last time, I took some pictures of the sights in "our" neighborhood. 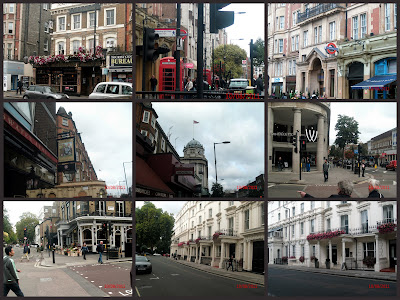 My last picture from England: 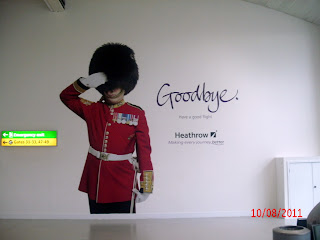 We had a newer plane going back to DC.  The seats seemed to be larger, so we were glad we didn't spend the extra money to upgrade to the "more legroom" section of the plane.  There was a very sweet older English lady sitting next to me; she was going to DC to visit one of her daughters.  One of the movies I watched was "Bridesmaids".  If you've seen that movie, you know how it starts:  there's a pretty risque scene at the very beginning.  I know my face was red, and I was hoping that the woman didn't look over at my screen until that section was over!
Going through security in DC was a breeze...almost.  I didn't realize what was going on:  they were scanning every other person, so stupid me just walked right on through the scanner.  The lady gave me directions, so I stood there with my arms above my head, and heard a beeping.  I walked on through, and she asked me if I had anything in my front pocket.  No, I knew that I didn't because I had taken out some change that I had.  Anything in my back pocket?  No, I answered, as I felt my back pocket and realized that I had forgotten to take my Oyster Card (magnetic tube/bus ticket) out.  So, that resulted in a little pat down of my right leg.  After that, everything was smooth sailing.  YS met us at the airport to take us home.
Final thoughts:
I felt very safe in all areas we went to, except King's Cross.  The tube was an easy way to get around; the buses were more difficult.  I definitely think being able to use the DC metro prepared us for the tube.   I think if we had a bus route, we would've done much better and would've saved some time.  I feel like we walked all over London!
Even though I had requested 2nd floor or higher, the basement room we had was great.  Everybody we met was so polite; I don't think we encountered one rude person the whole time we were there.  We had people on the bus asking us where we were trying to go (after hearing our "discussion" about which stop to get off) and offering advice.
There were several times we winced as we watched someone turning into traffic.  I could definitely live there, as long as I didn't have to drive in London.  I really hope that we can get back someday and see more of the UK.
Thank you for taking the time to read our London adventures.  It was an amazing trip; I still can't believe I actually saw so many things I had only read about or had seen on tv/in the movies.
Thank you for bearing with me as I relive my vacation!
Email ThisBlogThis!Share to TwitterShare to FacebookShare to Pinterest