Here's how you can visit an amusement park on $20:
1)  (This is the most important thing to remember!)  Find a family member or friend who has a Gold Card Pass and wants to use their "get someone in free" ticket.

2)  Since the sister has a gold pass:  FREE PARKING!  (Saved $8 by meeting somewhere and taking 1 car to the park.)

3)  Bring a camelback to carry your own water. (Saves on buying a cup in the park.) 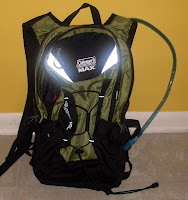 4)  Don't eat.  In our case, we ate lunch in the park:  a decent salad.  The chicken in it wasn't of the best quality, but the rest was pretty good.  I bought my sister's lunch, and the total was around $18.

I hadn't been to this park in a long, long time.  We didn't ride any of the rides, but we did go on the steam train that was used during WWII in Alaska to transport troops and lumber.  The park has 2 engines (both were used in Ak. during WWII):  Klondike Katie and Cinderella. 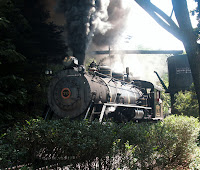 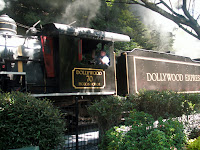 When the train is in the station, the area is covered in the steam.  Not a pretty sight! 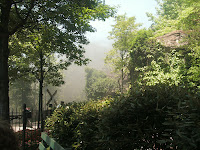 There is an operating Grist Mill on the grounds.   It was built exactly as it would have been in the 1880s and the first fully operating grist mill built in Tennessee in more than 100 years. What does it mean to build a structure as it would have been 100 years ago? It meant that the roof shingles were split by hand, and all the door hardware was created onsite by the park’s blacksmiths. The structure’s round logs were hewed by hand in front of the building site with holes drilled in the logs by hand using different size augers. The architectural shingles on the side of the building and all lumber were milled at the park’s sawmill which was then located in Craftsman’s Valley.  The window panes were made by the park’s glassblowers, and each window frame was made onsite using steam engine power to operate the five-in-one machine which is now located in the Valley Carriage Works wagon shop.
All work on the grist mill was done by then Silver Dollar City employees during the park’s operating season so that park guests could observe the process.  It took six months to complete the mill, just in time for the annual fall crafts festival.  The Dollywood Grist Mill is a complete and fully operating mill where corn and wheat are ground into flour daily.  Both are available for purchase by park guests, along with a variety of other goodies including the popular cinnamon bread.
The cinnamon bread was excellent!   My sister bought some for us to share, so there's another money saver for you! 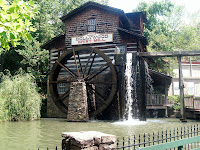 There's also a chapel on the grounds.  I couldn't find any information on the building, except that it was named after the doctor who delivered Dolly (as in Parton).

click on picture for credit
Y'all know how I am about old churches, or churches that appear to be old!  I have to go in them!  It smelled old, so I'd be curious to find out the details.  This is what the inside looked like: 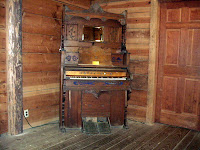 Old organ that was donated.  It sits on the altar. 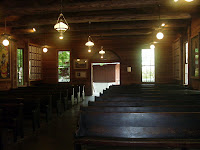 Standing in front of the altar looking toward the door.

There is also an American Eagle Sanctuary in the park.  Established in 1985, the not-for-profit American Eagle Foundation is headquartered at Dollywood.  The organization is widely recognized as a national non-governmental leader in bald eagle conservation, recovery and public environmental education.  The federal and state licensed organization operates the world's largest bald eagle exhibit and breeding facility where many of its resident non-releasable eagles have successfully reproduced in captivity and released into the wild. 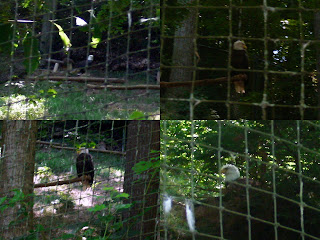 I had no idea these birds are as big as they are.  It was magnificent to see them on the side of the mountain.
I'm not sure just how many rides are in the park.  It didn't seem like there are very many, but we didn't go searching out the rides; in fact, we stayed away from them.  We went by the carousel; who doesn't like a good carousel? 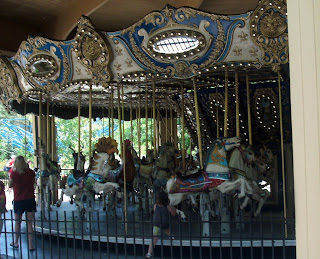 There's a new ride this year:  The Wild Eagle:  the first "winged" coaster in the USA.  YS has ridden it several times.  Me?  I'll ride a coaster as long as my feet are on a platform.  Don't even try to get me to ride one when the feet dangle.  No thank you.

Click on picture for credit
This is a picture of the incline during the ride.  My sister & I were in agreement that just that part would do us in. 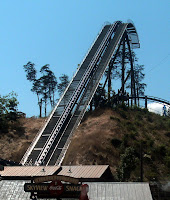 Right before we left, we got to go through Dolly's old tour bus.  The guide said that Dolly had 2 rules on her bus:  she always did the cooking, and she doesn't do dishes. 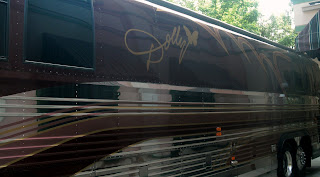 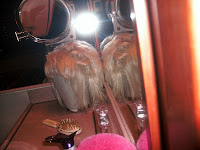 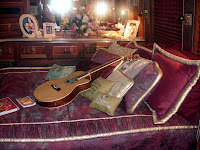 The park has an arts & crafts festival in the fall, and the lights at Christmas are spectacular.  We went a long time ago.  I may have to get a pass so I can go back for a couple more visits.  On second thought, maybe I didn't do the park for $20 or less!

Disclaimer:  all photos were taken by myself, except for those indicated by "click on picture for credit".  Links were included to give credit to the sites from which the information was taken. These links are indicated by underlined text.   For additional information, please visit www.dollywood.com