Shopping for a Car

Saturday, CH & I spent all day shopping for a car.  And by all day, I mean All.Day.  We gave OS my car, which left me without a car.  I knew which one I wanted.  It was the one that CH told me to look at when they first came out, but I thought they were ugly and wanted no part of it.  As time went on, I saw them on the road.  They were everywhere.  They grew on me, so I decided to just go by and sit in one.  Which led to driving one.  At 6'3", it's rare when CH finds a vehicle that he can sit in the backseat comfortably.  This one was it.
That was about a month ago, and we put off doing anything permanent until we gave my car to OS.  Last week my car was taken over, and I was left borrowing MS' car and YS' minivan.  Yes, I said "YS' minivan".  The minivan was passed down to the MS & YS as their primary form of transportation in high school.  It's safe, dependable, and, (most importantly) how many times have you seen a minivan being pulled over?  This poor van has seen better days:  MS pulled out in front of a car and she clipped the rear.  MS came home from football practice one day with a suspicious looking dent in the front, passenger side.  It looks like someone's butt would fit perfectly into the dent, leading me to believe that someone was slammed into it.  A call to the assistant principal (who is also the head coach) was inconclusive:  he said that there were no cameras in the lower parking lot, although I'm not real sure it didn't happen at football practice.  The minivan was dubbed "The Beast" by the boys when I drove it;  MS called it "The Shaggin' Wagon" during his tenure.  In fact, MS' Senior Superlative was "Most Likely to be a Soccer Dad"; his female counterpart also drove a minivan, and ours is immortalized in the 2010 yearbook.
Back to the car shopping.  You would think that since we knew what car we wanted, it would be in and out, right?  Uh, no.  I drove the base model (It's amazing how much a base model has on it these days!), the plus, and the exclaim.  This is going to sound crazy, but the base model was the most comfortable, and I thought had the best drive.  So I'm not going to get the crazy lights that change with the music, and I'll have to change the rear mirrors by hand, but who cares?  I'm getting a comfy ride with a comfy seat.  Who would've thought that the seats would feel differently in the upgraded cars?
We had to decide on a color.  The first dealership we went to had a base model (with a few extra add-ons) in a beigy-color that they call "dune".  CH wasn't crazy about the color; color doesn't matter to me...except I don't want black.  They wrote the deal down, and we said we'd think about it. Then we went to another dealership and they beat it, although this was on a base-base model, and they didn't have any in stock.  They have some black ones coming in on Tues., and he said he could trade one of the black ones for any color I wanted.  They had a silver one in the showroom, but it wasn't a base, and he said he'd give us a deal on it.  The deal was $40 more/month than the base.  I drove it, and it rode pretty smoothly, but that blasted seat was definitely different and not as comfortable as the base.  (I SWEAR it's not in my head!)  While we were thinking about it, CH got a call from the salesman from dealership #1:  they just had a truck roll up with 5 base models, all different colors.   We finished up at #2 after deciding that the extras on the silver one didn't really matter to us, and wasn't worth $40 extra/month, had dinner, then went back to #1 to look.  We decided on the dune...the original color that we saw.  It reminds me of the same color as my first car:  a Dodge Omni. 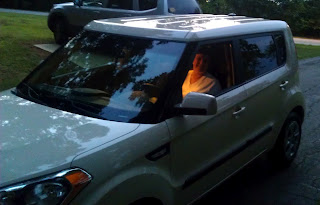 We picked it up last night, right before the dealership closed.  CH wants to get foglights put on for me (since my schools are out in the boonies), but I am so excited about my new car!  I'm going to love the mileage it gets, along with the bluetooth and Sirius.  AND, there are radio controls in the steering wheel.  Remember, this is a base model that has all of this stuff on it!
It may not be the most luxurious car on the road, but it's just right for me!
Email ThisBlogThis!Share to TwitterShare to FacebookShare to Pinterest