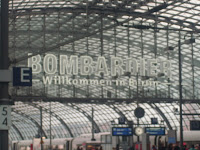 Ahhh...Berlin.  One of my coworkers described Berlin as...interesting.  Yeah, that's pretty much how I would describe it, too.  We rolled into Berlin early in the morning, after our "night train".  Ken had never been to the hostel before, so it took some time to figure out where it was.  And, I think this was when "the backpack miracle" happened.  The days kind of ran together, so I think that's when it happened.  All I know is, by the time we got to the hostel, my back was absolutely killing me.  That was the day I realized that I really wish I had taken my rolling dufflebag instead of a backpack.
So...we find the hostel, but the whole day was shot.  We had planned to go to the Pergamom Museum, but there just wasn't time.  That night was the German National Fussball Finals in Berlin, so things were absolutely crazy.

Especially in the train station.  We ran into fans from both sides singing and yelling.  At one point, there was a large crowd in the station, and there were policemen with their riot gear walking beside them. (I tried to be inconspicuous taking this picture, and it shows!) 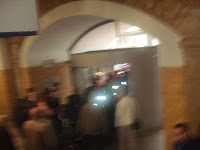 That evening, we ate supper in this restaurant that looked pretty deserted.  A few in our group ate outside, and the rest of us went inside.  There was only 1 other group in the restaurant, so it looked promising.  1 hour later, we still didn't have our food, although other groups had come in and were being served.  We were able to watch the entire game before we all ate and got our bills.  The part of our group that were outside had no problem.  And, to top it off, we watched them bring pizza from down the street into the restaurant.  Our waitress either didn't speak English, or pretended not to.  Especially when MN questioned the time it was taking to get our food.  They tried to smooth it over by bring MN & me sparkling wine, and giving the kids some kind of small nonalcoholic drink, after they said the kids could have a round on the house.  Apparently that means something different over there.  We took that to mean that they could order what they were drinking, and it would be taken care of.  We just chalked that up to experience.  (They did not get a good review from me on TripAdvisor!)
Because we had pretty much lost a day of sight-seeing, we had to cram a bunch of stuff into the next 2 days.  We spent 1 day with Sylvia, who was a part of our miracles.  Without saying too much (because I'm going to spend another post on this), we were able to sight-see with her.

We went to the Reichstag, which is the German Parliament.

The inside was just amazing. 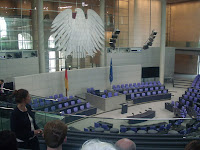 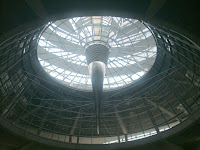 We weren't able to go up in the dome since Parliament was in session later than week, and they were having meetings.
The chapel, with pictures made out of nails: 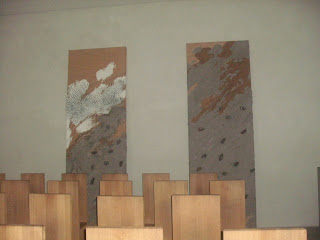 The Archives of the German Deputies (Christian Boltanski), which has the names of those elected from 1919 to 1999. 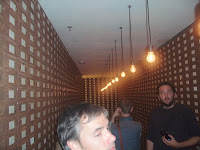 Black bands are under those who were persecuted by the Nazis: 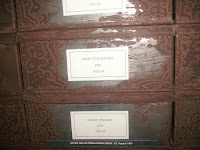 The area around the elevators were left as it was following the Russian invasion in 1945.  The only graffiti that was cleaned up were those that contained profanities. 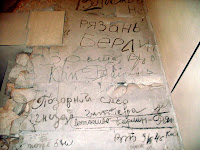 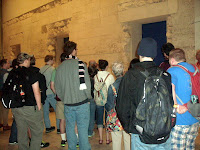 When we walked out, we were going across the street and were privileged to see this: 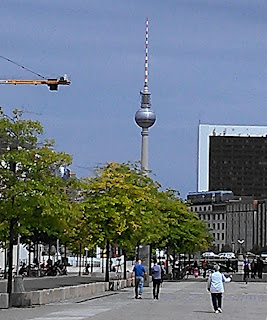 This is called "Pope's Revenge".  The tv tower was built in the 1960's, at a time when the wall divided the city.  Religion was "discouraged", and crosses were not to be found.  Ulbricht, the dictator at the time, ordered workers to realign the ball, and even paint it with material that would keep the cross from appearing.  But, nothing worked.  I am amazed that we got to see this...it had been raining and we had overcast skies every day up until this one.
Across the street from the Reichstag is the building that houses the politicians' offices.  Since the wall came down and democracy was restored, the German government has taken on a policy of "transparency".  That is why the building is glass.

We went by the President's House: 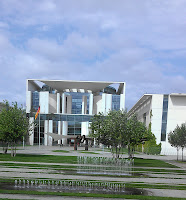 Then, there is the Victory Column:

It was completed in 1873 to commemorate German's victories in 3 wars.  The gold rings around the column are actual cannon barrels that were captured during the 3 wars.

The "Pregnant Oyster", which was the USA's gift to Germany.  It is a cultural center. 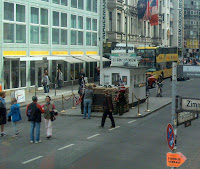 The Barbie DreamHouse Experience (We didn't go in!): 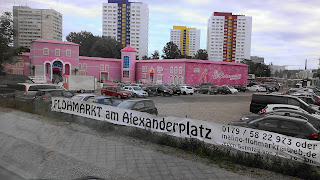 One night, Ken, one of the students, and I took a bus ride down Unter den Linden (Under the Linden Trees) to the Brandenburg Gate.

Next to the Gate, the hotel where Michael Jackson dangled his baby is located.

We walked back to the hostel, stopping at a few places along the way.  We took in the memorial to those who lost their lives trying to get over the wall.

We saw the brick cobblestones that follow the same path that the wall did.  This was all over Berlin.

Ken pointed out the Memorial to the Nazi Book Burning.  It consists of empty bookshelves in a hole in the ground. 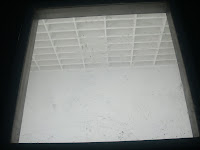 Next to it are a couple of plaques.  This one reads, "Where they burn books, they will in the end also burn people" .  The quote is taken from a play by Heinrich Heine in 1821. 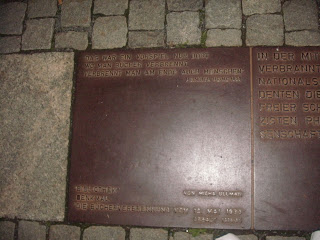 Every year, on the anniversary of this event, there is a book sale.
We saw a "Berlin Bear".

Ken shared his favorite memorial in Berlin:  Neue Wache (New Guard House).  Originally a guard house (DUH!), it was used as a "Memorial for the Fallen of War" from 1931 until the end of WWII, when it was damaged by bombs. According to Wikipedia, In 1969, the 20th anniversary of the GDR, a glass prism structure with an eternal flame was placed in center of the hall. The remains of an unknown soldier and of an unknown concentration camp victim from World War II were enshrined in the building. After German reunification, the Neue Wache was again rededicated in 1993, as the "Central Memorial of the Federal Republic of Germany for the Victims of War and Tyranny." The GDR memorial piece was removed and replaced by an enlarged version of Käthe Kollwitz's sculpture Mother with her Dead Son. This sculpture is directly under the oculus, and so is exposed to the rain, snow and cold of the Berlin climate, symbolizing the suffering of civilians during World War II.

We went by this street, which was the "theater district", and where celebrities hung out:

A lot of the train stations had murals depicting the city's history:

And, there were fountains: 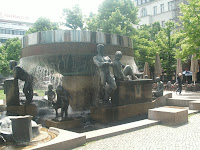 Last but certainly not least:  The Wall 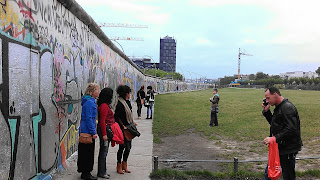 This is actually the "Inner Wall".  We were standing in "No Man's Land", which was the space between the Inner Wall, and the actual wall that divided east and west.
Berlin was definitely a "different city", full of graffiti and wall art, as well as history.  It certainly had a different feel to it than any other city I've ever been.
Email ThisBlogThis!Share to TwitterShare to FacebookShare to Pinterest
Labels: Germany