During our trip, we had several little miracles that happened, so we dubbed the trip "The Miracle Trip".
Miracle #1:  the Teacher (Ken) knows a woman from Austria who came to Gatlinburg when she was 19 to be a Tirolean Performer.  His wife's grandparents (I think that's the connection) took her in and treated her like a daughter, and Ken & his wife have kept in touch through the years.  This woman is just an amazing woman.  She founded "Vision for Africa" . This is a Christian-based organization that sponsors education and health needs for children in Uganda, and has spread into Kenya.
Back to the miracle!  When we were in Austria, we spent a few hours in Imst.  Ken had been in contact with Maria's assistant to see if it would be possible to meet with her for a few hours.  It didn't look like it was going to happen, but then, at what seemed like the last minute, it turned out that Maria was in Imst and would be able to have dinner with us.  She was an amazing person to talk with.  She had this incredible air about her:  very humble, but you knew you were in the presence of someone of greatness.  She gave me an autographed copy of one of her books.  She has an amazing story, and, while it seemed like she really had to fight for things, it made her a stronger person and set her up for her work with Vision for Africa.  Just before we left, we had to opportunity to meet her daughter.  This was Ken's first time to meet Angel. 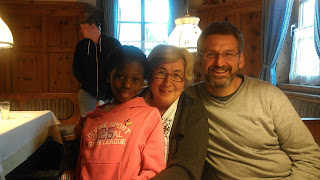 Angel (Maria's daughter), Maria Prean, and Ken
Miracle #2:  When we were in Berlin, our plan was to meet Sylvia Guttman at the family's Stolpersteine.  Brief background:  Sylvia is a holocaust survivor, whose parents were killed in Auschwitz.  She has an amazing story; you can read about it here.  The Stolpersteine are brass "stones" that are inscripted with a Jew's name, birthdate, date of death or deportation, and a location of death or deportation.  Some of the German states have declined the opportunity to have these placed in front of where the Jews lived.  It takes quite a bit of research, and a little bit of money to have one of them placed.  MS' group sponsored the Stolpersteine of Sylvia's grandparents, so that's where the connection came from.
Anyway, Sylvia had a flight from Boston to Newark, but wasn't sure if she would actually get on the flight from Newark to Berlin.  Her only reason to going to Berlin was to meet us there.  An added bonus was that her great-nephew (who lives in Tampa) met us in DC and stayed with us on the trip.  He had never been to Germany, but had always wanted to go.  More on that in a later post!
She wasn't sure if she was going to be on the plane to Berlin because she was flying stand-by, and the plane was supposedly full.  She did get on the plane, and we were able to meet her at the Stolpersteine. 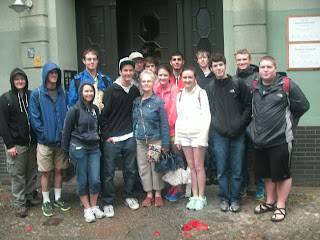 Sylvia & the kids in front of her parents' Stolpersteine.
Miracles #3 & 4:  While Sylvia was on her way to Berlin, we were changing Hostels.  Originally, we were going to be in Berlin a day later than we ended up.  Ken remembered to change some things, but kind of forgot to change the Hostel Reservations.  So, we had no place to stay our first night.  He frantically called one of Sylvia's friends, who happens to own a hostel.  But, since it was the night of the German National Football Championship, he didn't have openings in his.  He made some calls, and found one that could take all 17 of us.  It wasn't in the best part of town, but it was decent enough, and it was only for 1 night.
The day we got into Berlin, we had to change a few trains, and at one point, I looked at Ken and he had this strange look on his face.  I asked what was wrong, and he asked if we remembered him having his backpack.  It was the backpack that had all of the copies of our passports, medical information, and permission slips, among other things.  It was a pretty important backpack, to be sure.  We got off on the next stop, and he said he could give us directions and we could go on to the hostel, but the kids insisted on staying together and back-tracking to see if we could find it.  Sure enough, it was right where we had waited for a few minutes on a train.  It was right where he left it, and everything was in it.  This was a fairly busy station, too.  We all said a prayer of thanks, and continued on our way.
Miracle #5:  When we left Berlin, we traveled to Eisenach.  This is a small village where Martin Luther lived & preached (and later went into hiding at a castle above the village), Bach lived here and was baptized in the church, and St. Elisabeth of Hungary was married here (and lived in the castle).  We had a few "hop off the train and immediately hop on another train".  When we got to Eisenach, one of the boys realized he had left his backpack on a train.  He had his passport in it, so it was necessary that he find it.  Ken went into the information office and gave them the information.  The backpack was at the station after 2 hours of our getting there. 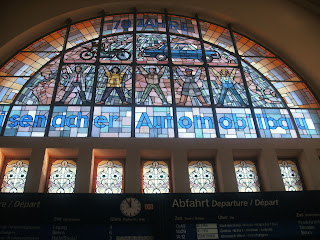 Eisenach Train Station
We had some smaller miracles along the way:  When we first got to Germany, Ken had a problem with not being able to get enough money for us from his bank.  That was resolved after some phone calls to the USA.  When he had to pay our hostel bill in Austria, he couldn't get to the bank because it was closed for the Corpus Christi Holiday.  He also needed to pay the bus driver.  The bus was able to send a bill, and he was able to go to the bank to get some money the morning we left.

In addition to having some miracles of our own, we saw 2 places where miracles took place.  The first one was WiesKirche with the miracle of the crying statue, and the 2nd one was in Eisenach with St. Elisabeth of Hungary.  Her story:  She was carrying bread, meat, & eggs to give to the poor in the village of Eisenach, when her husband (Ludwig IV...not Crazy King Ludwig!) saw her and asked what she was carrying in her apron.  She didn't know what to say, so she silently said a quick prayer, and opened her apron to have roses falling out.

So, it was only fitting that YS, his friend, and I would end the trip with another miracle:  the finding and delivering of our luggage!
Email ThisBlogThis!Share to TwitterShare to FacebookShare to Pinterest
Labels: Germany