I'm going to "touch" on the cities/towns/villages that we visited.  We only stayed in Munich for part of 1 day, and it was pouring by the time we got to Marienplatz.  We walked around for a little bit, until it was time for the Glockenspiel:

You can see just how hard it was raining in the video.  And yes, we were pretty miserable watching it!
Earlier that day, we went to BMW World, which I talked about during the Museums post.  Right next to the museum sits the sight of the 1972 Olympics. 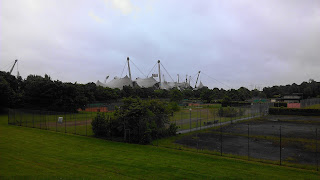 When we got to Marienplatz, MN & I had a mission:  she was looking for Christmas Ornaments, and I wanted to check out a Christmas Pyramid, like the one below. 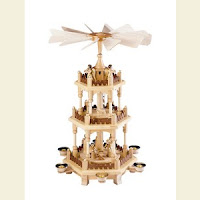 click on picture for credit
I had more success than she did, but after I was told it was going to cost about $50 just for shipping, decided against getting it.  Yep, I'm pretty much kicking myself over that one!
After the Glockenspiel, we walked through the breezeway of the Town Hall, and had a nice surprise:

If you watch The Bachelorette, you may recognize those pictures:  that's where Des & Chris had their date!
It was still raining (and was pretty cold), so we thought we'd be smart by hiding out in the breezeway of the Town Hall.  And then we realized why they call it a "breezeway".  It was pretty, though:

We met up with the group, then our plan was to go to "Hofbrauhaus" for dinner: 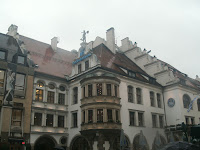 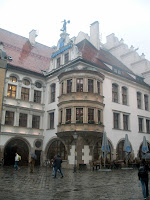 Notice how the umbrellas are down?  That's because we were in the middle of a monsoon. 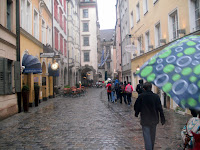 Here we are walking to Hofbrauhaus, only to be turned away.  Friday night + dinner time + rain= no room. At.All.  So, we went across the street to Hard Rock.  2nd verse, same as the first.  So, Ken found this really charming German Restaurant: 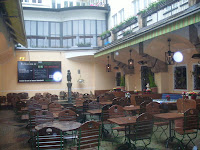 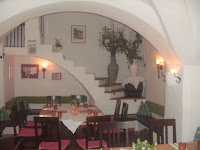 I wish I knew the name of it, because I'd really like to go on TripAdvisor and give it a good review.  I blew up the board that you see in the top picture, but that isn't the name of the restaurant.  I even checked Google Maps to see if I could figure it out, but no luck.  If I hadn't been in such a hurry to go in to get warm and dry, I would have taken a picture of the name so I would remember!
After we ate, we went to the train station to get ready for our night train to Berlin.  That is one thing that I will never do again (I hope!).  I knew I wouldn't have a chance to take a shower until the next night, so I tried to make sure I slept on my back (so my hair wouldn't be totally crazy).  Which would have been fine, except the bed felt like a board with a thin piece of foam on it. 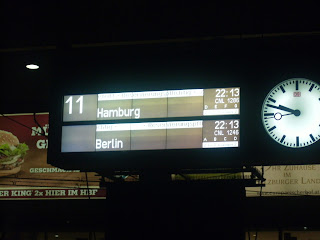 Finding our "rooms" for the night: 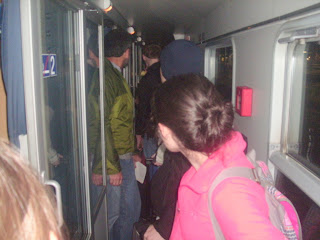 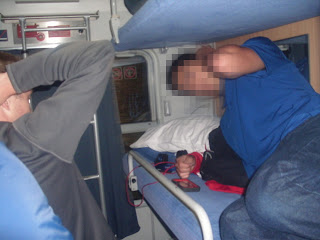 Munich is one place that I would like to re-visit.  I know that we missed an awful lot by just being there for a few hours.  The rain didn't help, either.
Next stop:  Berlin.