(To see larger views of the pictures, you can click on it.)
Since I shared the castles we visited, now we'll discover a few palaces!  The first palace that we saw was in Eisenach, where Wartburg Castle is located.  This palace was the "Town Palace" of Eisenach, and the building began in 1742.

It is used as the Thuringian Museum in Eisenach, as well as a city information center.  I stepped inside but didn't pay to go through it since I didn't have the time.

Weimar had a couple of palaces:  The Town Palace, and Belvedere Palace.  Belvedere may actually be considered a castle, but it wasn't on top of a mountain, so I'm saying it's a palace.
MN (the other adult) & I stayed in Weimar while the kids did their homestay.  Initially, we were going to go to Dresden, but there was a little problem with flooding, and expected flooding because of the enormous amount of rain that we were experiencing.  So, we decided to just stay in Weimar, which was fine, because there was an enormous amount to experience!

Since we were on our own, we were able to walk around the Town Palace and take all the time we wanted.  We stayed in there for at least 2 hours. 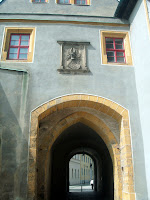 (I tried to do a panoramic view but didn't get the building to quite match up!) 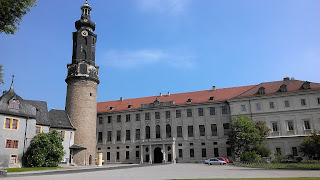 The palace has a museum of art; some dated back to the 1400's.  It was unreal to look at some of the artwork and realize how old it was.

It amazed us how intricate some of the pieces were, and to know that they were all done by hand: 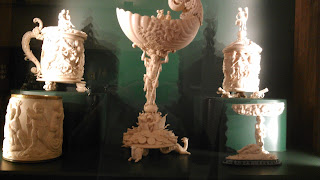 The backgrounds that went on altars were stunning: 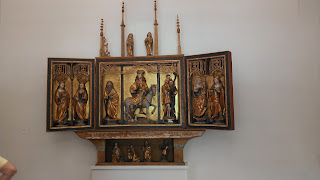 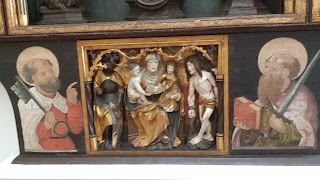 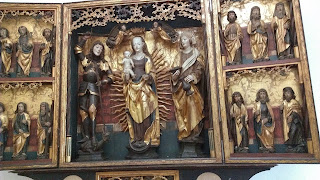 Maria Pavlovna (sister to Alexander the Great) lived in the Town Palace after she married Charles Frederich, Grand Duke of Saxe-Weimar-Eisenach.  We were able to tour the palace and see original articles that she had in the palace, as well as seeing how she decorated the palace. 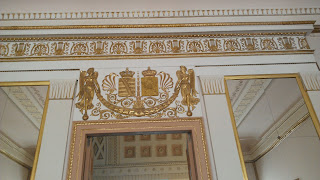 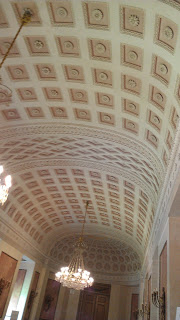 This is the original floor, along with one of her pianos. 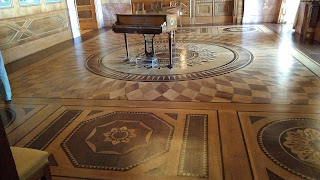 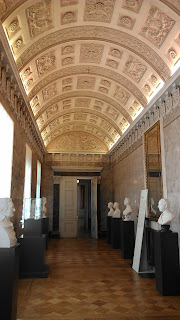 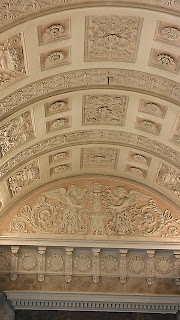 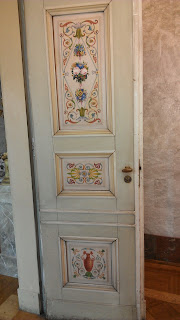 Another palace that Maria frequented is Belvedere Palace.  This was originally a hunting lodge, and was given to Maria and the her husband by her father-in-law.  Charles Frederich had Russian Gardens installed for her.  We visited Belvedere as part of a bus tour, so we didn't have the opportunity to go inside.  On the tour, the bus driver told us that only the film on the tour was in English, and when we got to Belvedere, all he did was hand us a pamphlet that told some things about the grounds.  I think we were the only ones who didn't speak German, so I think we missed a lot of the background.
The view from the palace: 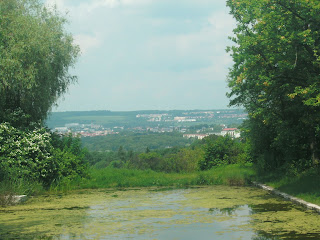 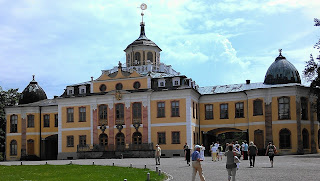 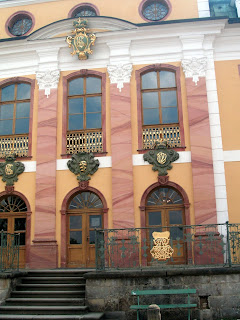 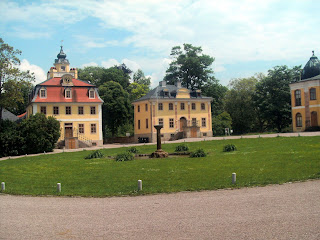 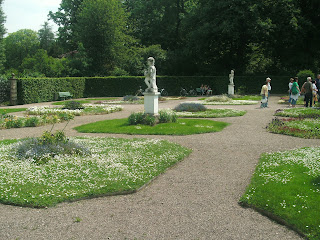 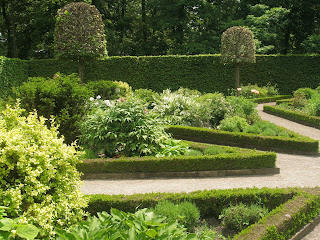 Once again, I really had a hard time deciding which pictures to use, and the pictures just don't do it justice.  In the Town Palace, every room we went into we took a deep breath at the beauty.

Tomorrow I'll be taking a break from the trip recap to participate in The Hodgepodge, but come back Thursday for more!
Email ThisBlogThis!Share to TwitterShare to FacebookShare to Pinterest
Labels: Germany