St. George.  GeorgenKirche.  Right in the heart of the town center of Eisenach, it was built in the 12th century.  It holds so much history. 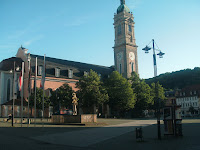 When you walk into the church, you are met with epitaphs from the 14th century of Ludowigian Landgraves.  Nearby Wartburg Castle was home for these landgraves, who are counts that ruled the land, or certain German princes.  (Yes, I had to look it up!) 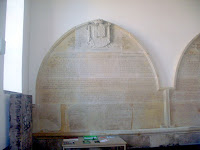 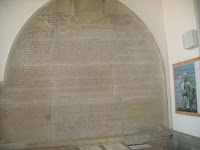 There is also a statue of Johann Sebastian Bach, who was baptised here, and whose family were organists for the church for some 130 years. 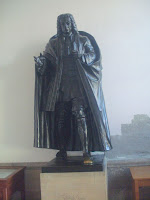 The baptismal font where Bach was baptized:

This church is also where Martin Luther was a choirboy at one point, and where he later preached as an adult:

As you go through the gates, if you look very carefully on the one on the left side, you can see Bach's initials:  JSB 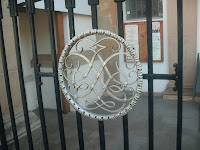 And, as I always do, I had to take a look at the ceiling, because they fascinate me!  St. George is in the process of being spruced up for a big anniversary that's coming up.  In this picture, you can see the difference between what's been worked on, and what hasn't: 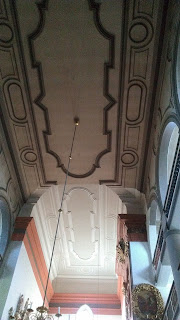 After Eisenach, MN & I went to Weimar.  There were actually 2 churches we went into there.

The first church is St. Peter and Paul, or HerderKirche.  It was originally built in the 1200's, but was burnt down to the foundation, rebuilt, but burned again in 1424.  In 1945, bombs damaged the building.  Unfortunately, when we went in, there was quite a bit of renovations going on.  There was also a baptism, so we didn't stay long.  Just long enough to get a few pictures: 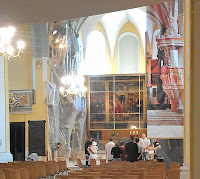 The altarpiece was completed in 1555 by the son of the artist who began working on it in 1553. (The father is buried in JakobsKirche.) 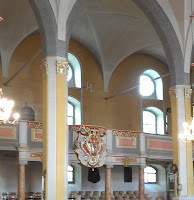 Jakobskirche is another church in Weimar.  Goethe (who is a famous German artist, writer, and politician) was married in this church.

There is a plaque commemorating the original Jakobskirche, which was built in 1168 but demolished in 1712 because it was in disrepair (due to the city wall being built so that the church was outside of the city).  1818 is the year the present day Jakobskirche was completed.

Friederich Schiller is buried there, along with Lucas Cranac the Elder (the artist who started the altar piece in St. Peter & Paul):

The church had a bell tower that was open, so I make the trek up to the top:

The view of Weimar from the top:

If you look in the next picture, on the hill you can see the tower for the memorial at Buchenwald Concentration Camp (coming up in a post very soon).

I had to take a picture of this cat.  He walked up to the door, and acted like he just couldn't decide if he really wanted to come in or not.  (He ended up walking away)

When we went to Tønder, Denmark for a few hours at the end of our trip, we strolled into the church.

The altarpiece was donated to the church in 1695:

The tower and another part of the church was part of one of the 2 original churches in the town, and the pulpit came from that church.

The organ loft originated in 1596:

There are some pews that are called "Magistrate Chairs".  These originated in the 1600's:

Although we didn't go into as many churches as I would have liked, the ones we went into were full of history and were very pretty.
I'm taking another break tomorrow for the Hodgepodge.  Come back on Thursday for more!
Email ThisBlogThis!Share to TwitterShare to FacebookShare to Pinterest
Labels: Germany