I tried to narrow down the pictures, but it was so hard!  All of the castles & palaces were so beautiful and had such gorgeous views, that it was next to impossible.  So, I decided I'd better split the posts up into Part 3A (Castles) and 3B (Palaces).  (To see a bigger picture, click on the picture.)
I hit on Neuschwanstein in my "Getting There" post.  I couldn't write a castle post without including it one more time: 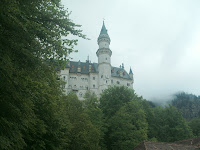 Within view of this castle is Crazy King Ludwig's father's castle, Hohenschwangau.  This is where King Ludwig II spent part of his childhood. 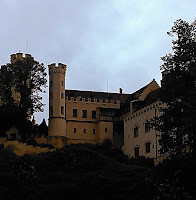 Unfortunately, we didn't tour this one, but the outside was just gorgeous.  Guess I'll have to go back, darn it!
The next castle on the trip was Ehrenberg.  There are actually 2 castles' ruins here:  Ehrenberg & Schlosskopf.  We could see them from our room in the Austrian Hostel:

I hiked up to the lower castle, Ehrenberg.  The castle dates back to the 1200's.  Part of the group hiked on up to Schlosskopf, and they said the views were magnificent. 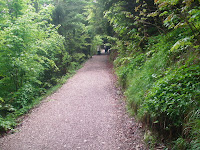 Finally I could see the castle: 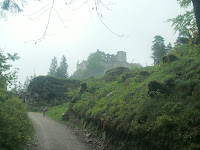 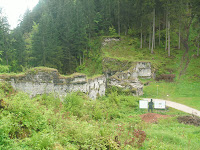 The castles are lit up at night, which make for a really nice view when you're at the bottom of the mountain.  (No pictures, though!)

The views from the ruins: 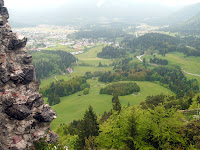 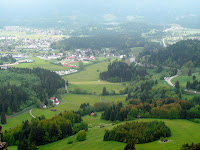 Looking at Schlosskopf from Ehrenberg: 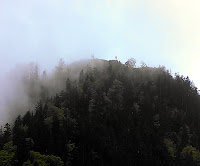 At the bottom of the mountain, there is a museum which the kids seemed to enjoy: 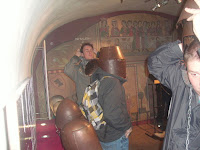 Another castle we visited was Wartburg (a UNESCO World Heritage Site, along with the WiesKirche).  This castle is on a mountain outside of Eisenach.  We rode a bus to the parking lot, but then we had to hike up the rest of the way.  It's a very good thing that we didn't have to hike up the whole mountain, because just half of it was plenty! 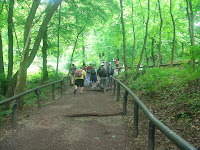 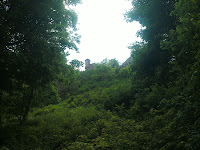 The building of Wartburg Castle began in the 1000's.  St. Elisabeth of Hungary lived there in the 1200's, and in 1521 Martin Luther hid out in the castle and translated the Bible.
The tour began with some artifacts: 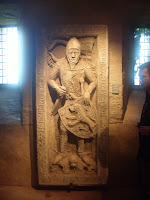 A lot of the castle had been reconstructed according to the time period.

The outside of Wartburg: 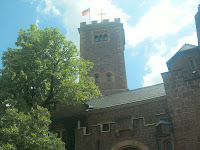 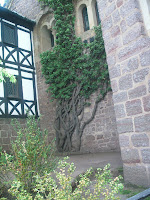 If you look closely just behind the gutter, you can see where there may have been a window or door that has been covered up: 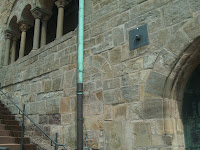 The mural in the Chapel that survived a fire in the 1300's:

The hallway to the Chapel, which has paintings from St. Elisabeth's life on the wall: 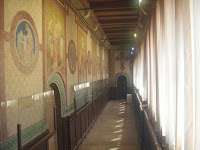 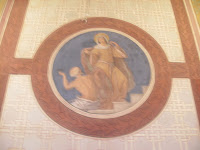 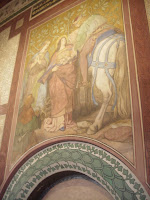 The doors were magnificent: 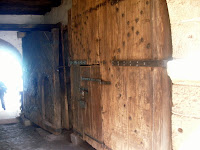 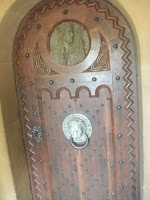 King Ludwig II (from Neuschwanstein) modeled his Grand Hall after this one, where concerts are still held:

And the views from the castle: 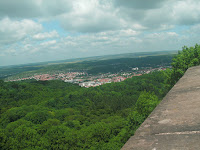 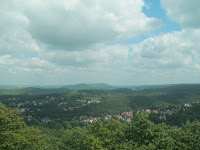 We even had the privilege of sleeping in a castle that has been turned into a hostel!  From what I could find, it was the residence of a baron in the 1700's, but the architecture suggests it was built in the 1500's.  We stayed in the tower, which was quite a walk, since the Europeans don't have the Individuals with Disabilities Act, and aren't required to make sure there is handicapped access everywhere.
The Entrance 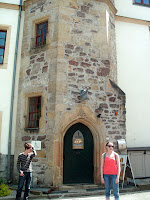 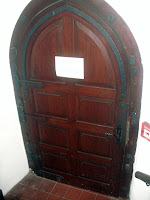 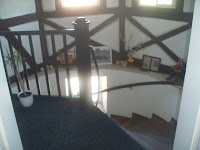 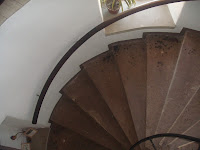 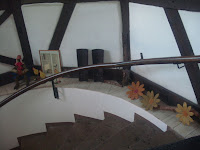 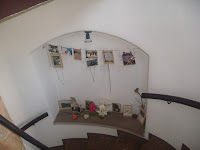 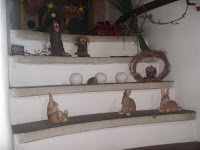 Sunrise from my window

Come back tomorrow for Part 3B:  Palaces!
Email ThisBlogThis!Share to TwitterShare to FacebookShare to Pinterest
Labels: Germany