I have to admit, I was a little concerned knowing we would be staying in hostels during our trip.  I envisioned dorm-like rooms, with multiple bunk beds and hall bathrooms.  And, I didn't think they'd be very nice.  Boy, was I pleasantly surprised!
The first hostel we stayed at was just outside of Reutte, Austria.  It was more like a Bed & Breakfast, actually.  MN (the other adult) & I had a room to ourselves, and we had our own bathroom.  I think there were bunk beds for the kids, but I didn't take a peek at them. 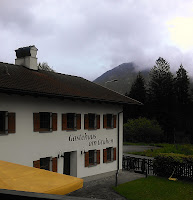 (Our room was the 2nd door from the left, 2nd floor) 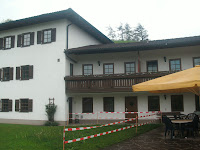 The ceramic wood heater in the dining area 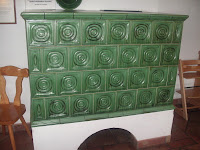 I seriously want to take CH back and stay here.
Our next hostel was in Berlin.  It was in a sketchy area of the city, but it was a place to stay for 1 night!  In this hostel, MN & I stayed with the 3 girls (there were 3 bunk beds), but there was a little bit of a problem with the sheets not quite being long enough for the bed: 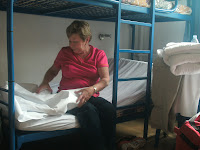 We did have our own bathroom, though!

For the other 2 nights in Berlin (in the original hostel), MN & I had our own room (well, with YS!), with our own bathroom.  Even though this hostel was right next to the train station (literally!), it was quiet.
This is the only picture I took of this hostel.  This was our view from the window, with construction going on next door.  I said the hostel was quiet, and it was until 6:30 a.m. (that's NOT a typo!) when they started working!

The next hostel was in Eisenach.  I already talked about that hostel at the end of this post, which was a castle at one time.  MN & I each had our own room, so we didn't have to share.  We did, however, have to walk down a short hallway to the bathroom & water closet.  The girls were down the hall from us, and they had their own bathroom.  There was a man who was in the other room, but he used a different bathroom.  Again, I want to take CH back and stay here. 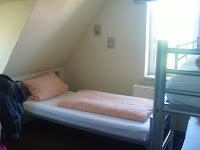 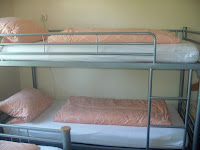 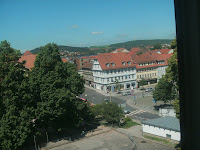 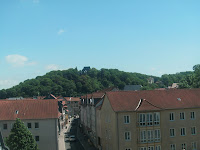 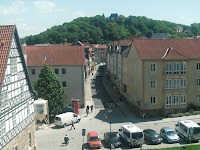 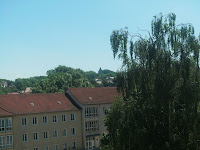 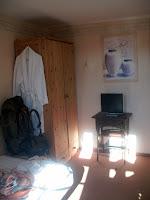 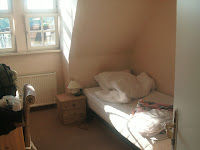 The next hostel for MN & I was one night in Kölleda, where the kids had their homestay.  Again, MN & I didn't have to share a room, and we had our own bathroom.  We were met at the door by a tatooed woman who spoke very broken English, but was very nice.  We also heard a bird in the background, although we never saw it.  This hostel/"pension", while in need of some updating, was actually quite comfortable.  We had a very "German" breakfast the next morning of bread, cheese, tea & coffee, butter, jelly, and some juice.
The front hallway: 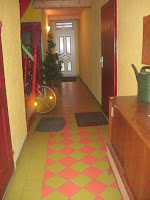 Stairs going up to our rooms: 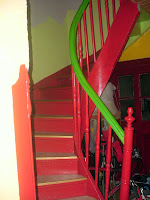 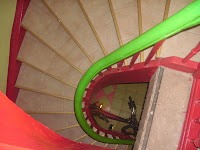 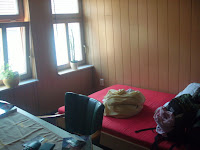 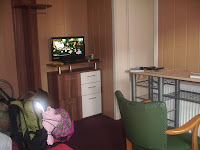 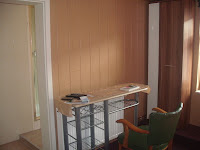 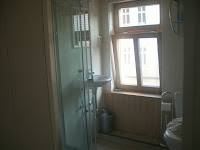 The next day, we met the kids at school.  We spent the day with them, where they talked to classes.  After school, one of the teachers drove us to Weimar where we spent a couple of days by ourselves (although we did run into one of the kids on Saturday!).  I think this would technically be a "hotel" instead of a hostel.  I didn't take a picture of the breakfast room, but it was pretty nice, and they put on quite a spread for breakfast.  When we saw our room, it was so big with such big windows, we felt like we were staying in a palace! 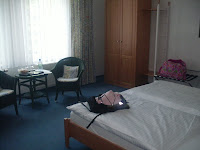 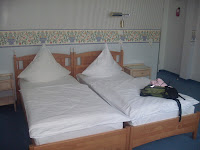 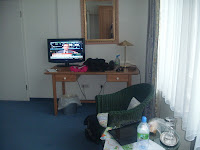 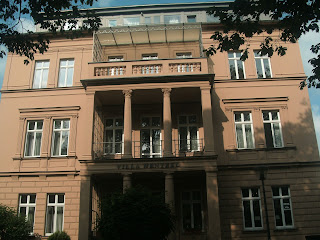 The hotel was near the park, and right across the street from Bauhaus University.  It was a very short walk into the center of town.  Nice, quiet location (except for 1:00 am on Saturday night when some kids were getting into their car after partying!).  This is another place I would definitely stay!

Next stop:  the island of Sylt, in the North Sea.  This hostel was more like I was expecting:  several buildings with dorm-style rooms.  MN & I shared a room, and had our own bathroom.  The bathroom was fairly large, and the shower consisted of a curtain in the corner of the room with a drain in the floor.  It worked, though, and the pressure was great.  The only pictures I took were of the view from our window: 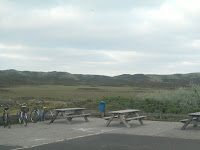 If you look closely in this one, you can see a sheep next to the building: 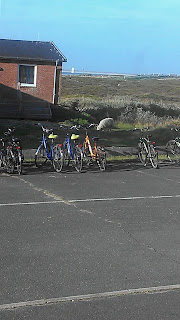 This picture will give you an idea of how the "compound" looked: 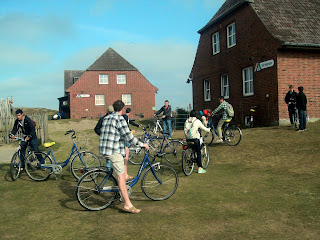 After Sylt, we stayed one night in Hamburg.  Thank goodness we only stayed 1 night!  Originally, MN & I were going to have our own room, and the girls were going to be in another.  The boys were going to be a bit scattered, but we were able to rearrange everybody so everyone was somewhat together.  Since YS, his friend, and I weren't leaving for home the next morning, YS & his friend stayed in MN & my room, and MN & I bunked with the girls.  The bathrooms were in the rooms, but they were very, very small.  There was a separate shower and water closet, and they were about the size of an airplane bathroom.  Seriously.  And, the room that we were in smelled like urine.  The next morning, I woke up early, got ready, and read for a while, waiting for the boys to get up.  Our train to Copenhagen didn't leave until early afternoon, so we had plenty of time.  After a while, I couldn't stand it any longer, so I got my stuff, went to the boys' room, woke them up, and told them I was going downstairs to the lobby to wait for them.  I didn't take any pictures of this hostel, unfortunately.  It was very convenient because it was next to the train station, but it was loud (due to the number of unchaperoned kids), and the doors slammed all night long.

Overall, my experiences with hostels were positive.  I was very surprised at how inexpensive they were.  Even our hotel in Weimar was very reasonable for U.S. standards.  The only thing with the hotel was that there is a "tax for the town" included, and it had to be paid for with cash.  But, it was only a few euros.  Literally, just a few, so it wasn't any big deal.

My whole perspective of hostels has changed.   As I said before, there are a couple that I definitely would stay at again.  And, the price is right!