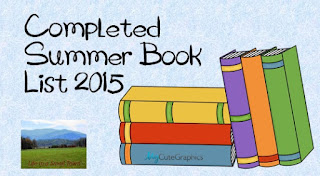 I've done a lot of reading this summer. If I didn't do anything else, I read some books that have been on my shelf for a while. I really like the Young Adult Genre. When I mentioned it to the school librarian, she said that it was because they're well written;  the YA writers have to meet certain guidelines, unlike Adult Novels. Here's a run-down of the books I read:
(Click on the book to be taken to the Goodreads Page)

Books that had been on my shelf forever for a long time:

Prisoner B-3087 (Alan Gratz) Based on a true story, this book follows Yanek as he survives 10 different concentration camps. A real page-turner, I zoomed through this book in no time. It was a tear-jerker as well.

Caught (Margaret Peterson Haddix) I remember MS being so enthralled with The Magic Treehouse series. I sat down one day with one of his books and didn't move until I finished it. Caught is like a YA Magic Treehouse. It is part of the Missing series, but you don't have to read all of the books to know what is going on at the beginning of this book. This book dealt with Albert Einstein and his missing daughter. Definitely historical fiction, I found it to be fascinating.

The Curious Incident of the Dog in the Night-time (Mark Haddon) Mr. Haddon does an excellent job of getting into the mind of a young man with autism. The reasoning, the sensory deficits, and the coping were very well written. It also brought to light misunderstandings of people with autism. On top of that, it had an excellent story line!

Ghost Boy (Martin Pistorius) Oh. My.  This is a book that every Speech/Language Pathologist student should read before they start working with people requiring an augmentative communication device. Martin began life as a very normal boy...until he suddenly became sick and unresponsive. He was basically written off as destined to live life in a shell until an employee of the facility saw something. Martin writes about his journey to communicate, and how communication turned his life around. All because of 1 person who believed in him. His journey is heart-wrenching, especially when he talks about how he was treated because of ignorant employees who thought he didn't have feelings & couldn't understand what was going on around him. Amazing story.

The Rosie Project (Graeme Simsion ) A few people in the FB group talked about how this book was so incredibly funny. While there were some parts of the book that were humorous, overall I just didn't think it was as funny as they did.  Don Tillman is a professor of genetics. He also has Asperger's, but he doesn't know it. On his quest to find the perfect mate, he has made a list of requirements that he gives out so he doesn't waste his time (The Wife Project).  Then Rosie walks into his office. She doesn't meet any of the requirements on Don's list, but he is intrigued by her. Then, Rosie tells him that she wants to find her real father; this turns into The Dad Project. Interesting & good book...I just didn't think it was as funny as some others did. There is a sequel called The Rosie Effect. I'm sure I'll get around to reading that one as well.

Books that I found through other's recommendations:

Take me With You (Catherine Ryan Hyde) This book was a very pleasant surprise. A great book to read at the beginning of the summer, the story follows August who is a recovering alcoholic teacher. (He doesn't teach people to be recovering alcoholics; he's a teacher who is a recovering alcoholic!) As he is headed to Yellowstone, his RV breaks down. The mechanic asks him to take his sons with him because he has to do jail-time and has no one to look after them. A special bond is formed, and August teaches the boys life-long lessons. Halfway through the book, the summer is over. The rest of the book has the boys growing up and rekindling the friendship with August. Truly a heartfelt book!

A Memory of Violets: A Novel of London's Flower Sellers (Hazel Gaynor) Another book of Historical Fiction, Ms. Gaynor writes of the flower sellers in the late 1800's. She tells the story of Rosie & Florrie who, as young girls, were expected to bring money home after selling flowers. Following their mother's death, it was Florrie's responsibility to take care of Rosie, but one day they become separated. Rosie is legally blind, so she is unable to make her way back to Florrie. Florrie lives the rest of her days in Mr. Shaw's Home for Watercress and Flower Girls, but never loses hope that she will find Rosie one day. About 20 years later, Tilly begins working at the Home, and discovers the history of Florrie & Rosie. After some research and a bit of luck, she finds out what happened to Rosie. I found this book to be very interesting, especially since it is based on history.

The Plum Tree (Ellen Marie Wiseman)  ** spoiler alert ** This is a love story...a different kind of love story. This is the story of a love that survives as the main characters survived during one of the earth's most shameful periods in history. Once I started this book, I had a very hard time putting it down. I felt the pain of Christine (a Christian) and Isaac (a Jew) as the war came to their little village and changed the course of their lives. I could see the Nazi soldier in the attic, looking for the escapee. This book is a definite tear-jerker as their lives unfold. Ellen Marie Wiseman does an extraordinarily amazing job of weaving the tale so that the reader feels like he is right there in person, seeing the events as they take place.

The Network (Katie Cross) When I started reading Miss Mabel's School for Girls, I thought it was like a cross between Harry Potter & The Hunger Games.  By the time I finished, I had a different frame of mind.  In this book, we meet Bianca who is a 16 year old witch. She reminded me of Katniss in that she is a very strong young woman who faces a life or death situation. The series continues with Antebellum Awakening, then we get a look into each of the characters' interview with the "Watcher" , who decides what school the witches will attend, if they are accepted to any school, during The Isadora Interviews. I just finished reading Mildred's Resistance, which is a prequel to the series but just came out. The newest installment, The High Priest's Daughter comes out mid-September, and picks up where Antebellum Awakening left off.
I love Katie's writing. I can visualize everything she writes, and could see this being made into a movie/movies.

Have you read any of these books? If so, which ones? Did you like them as much as I did?