I can sum up our vacation in 1 word, but I think I'll let Robin do it for me:
Some nights we got some relief...as long as the wind was blowing. We also had some mosquitoes to deal with, but they actually weren't too bad. Thank goodness for air conditioning in our little trailer!
We were very pleased with our campground. When we got to the site we reserved, we realized how small it was. Our trailer would have fit, but we wouldn't have been able to put up our canopy. The office staff was so accommodating; they gave us a list of sites to look at so we could switch. We ended up with a large site. It didn't have the view that our original site had, but it had some shade. Plus, we had a large RV blocking the late afternoon sun.

(Reminder: You can click on the pictures to see them better!) 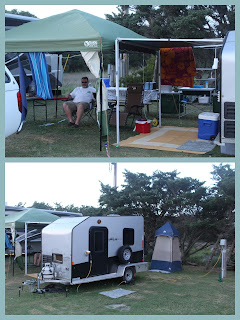 The view behind our site: 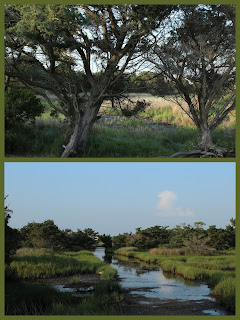 We didn't have anybody in the next 2 to the other side of us, so we had plenty of room.
The OBX is so different than Florida. Once you get south of Nags Head, the only chain businesses you'll see is Dairy Queen & a Food Lion. It definitely adds to the charm. Then, of course, there was this: 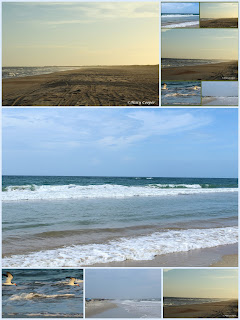 We went on a bird watching walk given by the Park Service. We saw several animals during the walk: 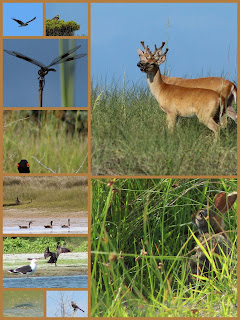 Of course we saw these beautiful structures: 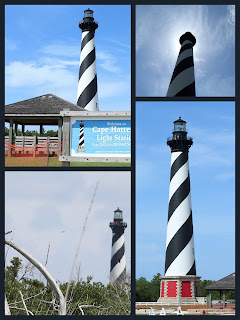 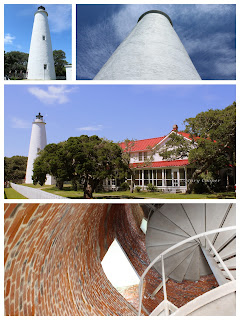 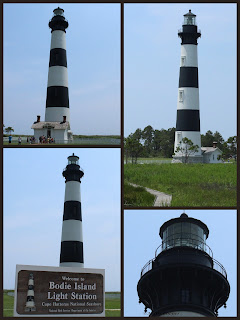 We didn't climb to the top of Hatteras or Bodie Island. It was just too hot.  Ocracoke's stairs aren't open, and the base is only open during certain times. We just happened to hit it when it was open. The history of the lighthouses was fascinating. What a job the lighthouse keepers had!

We saw cool things on the beach:
Horseshoe crab 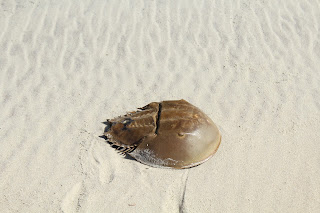 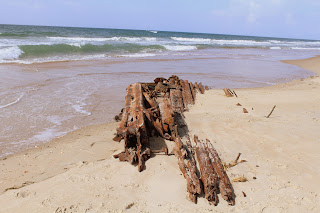 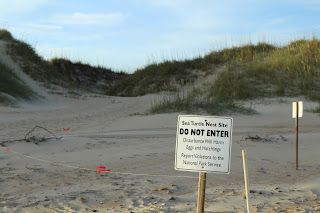 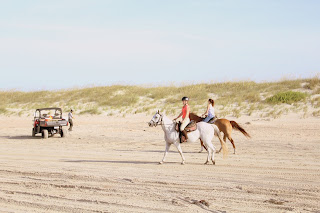 The man with the vehicle was a biologist with the Park Service. He had just moved about 150 turtle eggs back  off the beach so they wouldn't be in the way.
CH got to drive his truck on the beach (I'm pretty sure this is the #1 reason we went to the OBX in July): 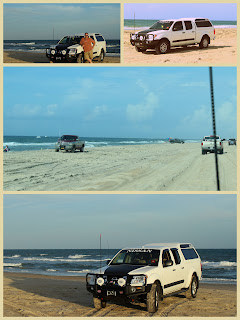 We spent a day out on the beach:

(I bought the little tent at Dicks & it worked great!)
We went to Kitty Hawk but didn't walk up the hill to the memorial. (Waaay too hot for that!) 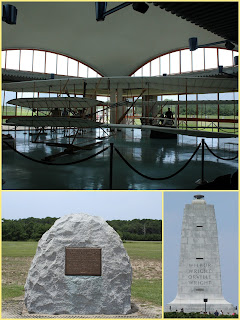 On the way back from Kitty Hawk, we stopped in Manteo to see Fort Raleigh (the site of "The Lost Colony") 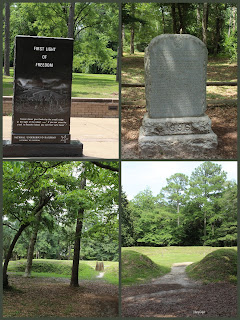 Following the volunteer's recommendation, we went to Elizabethan Gardens. It looked very nice, but we didn't go in since it cost $9/person, and we're not that much into flowers and plants. 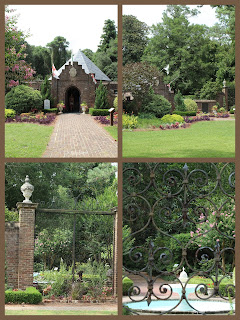 In the campground and just outside of it, we saw some very interesting things: 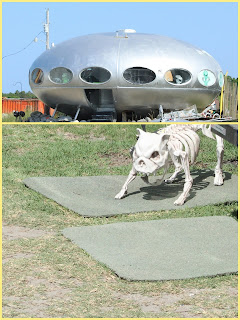 According to a friend, the "spaceship" is called a Futuro House. It was designed by a Finnish architect to use as a ski chalet.
We even managed to see a few pretty sunsets: 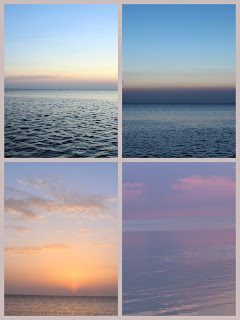 Some of you may recognize this house from Nights in Rodanthe: 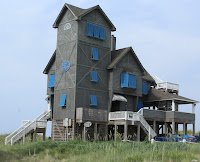 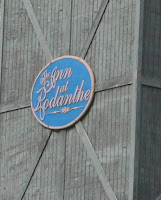 If you remember the movie, the house was right at the edge of the ocean. Well, it had to be moved or else it was going to be the ocean. It was in disrepair and just about to be condemned when the current owners saved it. They moved it to its present location (snugged in between some houses), put the blue shutters back on, built the balconies, and even redecorated the inside to look like the movie.  You can stay here for right around $2500/week. (See the details here) I had a hard time finding it, especially when we were coming from the north; it's easier to find coming from the south.
CH originally wanted to stay at one of the National Park Campgrounds, except there's no electricity or water. I mentioned it was hot, right? The Frisco Campground looked the best out of the ones we saw. We rode around the campground & took a look around. The views from the top were spectacular: 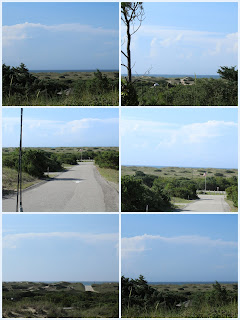 I definitely would stay there in cooler weather. They're only open from May-October; July is not the time to stay!
Overall, a decent vacation. The OBX is very family friendly. In fact, almost everything closes at 9:00, but since there are a lot of fisherman in the area who get up at the crack of dawn to fish, it's probably late to them! While there are some little markets spattered around the islands, there are only a couple (Conner's and Food Lion) that will have everything you need. I asked a waitress where she does her grocery shopping, and she told me the 2 that I just mentioned. Which means she has a drive to get there.
This was a relatively inexpensive vacation for us. Our biggest expense was the campsite & gas. The only attraction that we went to where we had to pay was Kitty Hawk, and it was only $4/person. The  Fort Raleigh Visitor Center has a film you can watch that summarizes the Lost Colony. There is also a show there, but we didn't stay for it. We thought the restaurant food was very reasonable, especially for being at the beach. Gas wasn't even too high; it was around $2.90/gallon.
I would definitely recommend a trip to the Outer Banks...just not in the dead of summer!