A Walk in the Woods

Yesterday started out as a really yucky day.  It was raining when I woke up (YAY!), but I was afraid it was going to mess up part of  my plans for the day.  Oldest Son had a day off, so I went up to see him.  He's turning into quite the "Nature Boy", so he had a hike on a very small part of the Appalachian Trail planned for us.  I love waterfalls, so OS had one he wanted to show me.

By the time I got to OS' house, it had pretty much stopped raining.  We had to go by Financial Aid and drop something off, then we grabbed a quick lunch and we were off on our adventure!  On the way we went through a little town that has the oldest covered bridge still in use in the state. 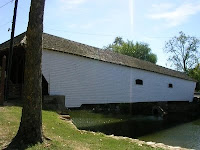 Then, we made it to the trail: 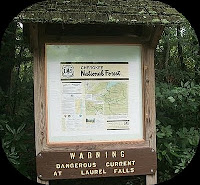 At the beginning of the section we hiked, there was a canopy of these gorgeous rhododendron: 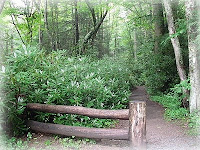 I bet it's absolutely stunning when they're blooming!
Not too far in, we came across this sign: 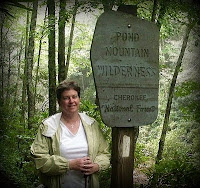 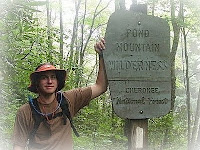 My trail guide!
We crossed a bridge that was just a little  scary to me because  it was pretty high and you could see between the slats: 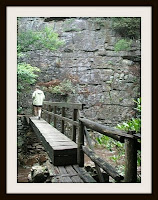 But the view was lovely: 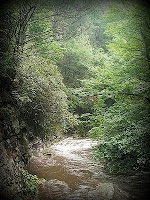 We saw walls of rocks: 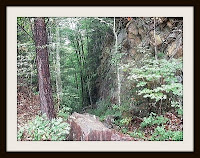 Then, we came to a very large "hill" with rocks built into the side to make stairs: 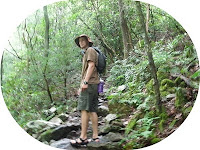 We finally made it to the falls: 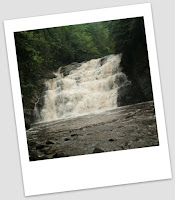 This picture  doesn't do it justice as to how big it really was.  OS & I had a discussion about how anybody could see that and not believe in God.
I was pretty fascinated by the foam that the falls made: 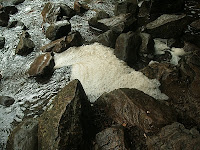 The whole way down to the falls, I kept thinking about having to climb back up the hill.  It sure would be a lot easier if they had installed an escalator when they made the rock steps!  I mean, there's plenty of water, so it shouldn't be that hard to generate electricity, right?  It turned out that it really wasn't all that bad; I stopped a couple of times going up, and it was all good.
I spent 4 years in that area when I was in undergrad school, but didn't take advantage of everything that the area had to offer.   After yesterday, I regret that I had no idea of the beauty of the area.  I did go to the river a couple of times, but never hiked.

After spending quality time with OS yesterday,  I learned a few things:

1.  OS knows what he's doing when he's out on the trail.  He showed me things to look out for just in case something happened to him and I had to make it back by myself.
2.  His tendency to wear out shoes is apparently now working to his advantage.  The shoe company is sending him free shoes to wear out, then send back so they can figure out how to make them last!
3.  OS loves him mom.  He looked out after me during our hike, stopping every now and then when we were walking up the hill from the falls.  He made sure I had plenty of water and gave me a walking stick to use!  Yes, I am the queen!
4.  I am incredibly out of shape.  Now that my back is better, I'm definitely going to have to hit the walking trail & treadmill.
5.  OS is in incredibly good shape.  It's a different shape than he was in when he played football, but I don't even think he broke a sweat when we hiked.  Me,well, I was soaked by the time we  got back to the car!
6.  I really enjoyed being out in the middle of nowhere.  Taking in the clean, fresh air and just being out there with my boy, and feeling completely safe.  (Of course, I don't think I'd like it when it was dark...I have too great of an imagination-thinking about the bears and other wild animals that are roaming out there!)   I may even invest in some boots (which are necessary to keep the rocks out of your shoes!) and take in some trails around here!


You know, as hard as it is to admit that my baby is all grown up, it is just as satisfying to see him as an adult.  Sure, there are areas where he still needs some guidance, but I'm extremely proud of the man he's become!
Email ThisBlogThis!Share to TwitterShare to FacebookShare to Pinterest
Labels: hiking, mountains, OS, waterfall