This is going to surprise y'all, but sometimes I get in a rut.  (I see the shock on your faces!)  I try to keep a calendar with what we're having for dinner on the side of the frig.  This was in response to being tired of answering the question, "What's for supper?" 15 million times a day.  The calendar can be seen as soon as anyone comes up the stairs into the kitchen, which is the way we all come in the house.  The only confusion comes when the plan has to be changed due to activities, or just if what is planned doesn't seem "right" for the weather or for that night. 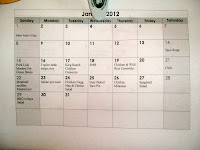 There are times when I just don't feel like sitting down and planning out our suppers, 2 weeks at a time.  I get tired of fixing the same thing month after month.  So, I switch over to denial mode:  if I don't plan, I'll magically come up with something to fix.  It takes a lot of time to research new recipes on the internet, and then it takes courage to actually fix them because it may or may not taste as good as it looks, or as good as I think it sounds, so there's always a backup plan to order take out.
I took the plunge a couple of weeks ago and found some recipes that looked great...and every one of them turned out great!
On Mondays I try to fix something in the crockpot since I get home later than the rest of the week.  (The following pictures are not mine; I took them off of their respective websites.)
On the schedule was:

http://crockpot365.blogspot.com/2008/07/five-spice-steak-strips-crockpot-recipe.html
We had this over rice, and I used a London Broil that had been marinated over night.  One word of advice:  the Chinese 5 spice was cheaper in the oriental section of the grocery store instead of the spice aisle.  It was really good; I'll definitely be making this again!
Italian Pot Roast 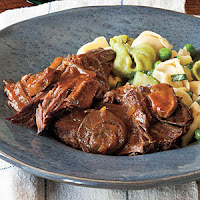 http://www.myrecipes.com/recipe/italian-pot-roast-10000002012828/
CH & YS actually liked this better than I did.  My local Kroger is undergoing a major update, so the frozen foods are at a minimum.  I substituted mini ravioli for the tortellini, and had to use yellow squash for the zucchini.  (Not real sure why Kroger didn't have zucchini.)  CH said that the gravy/sauce was better when he had it for leftovers on Tuesday.  I'll be making this one again, too.
Chicken-and-Wild Rice Casserole http://www.myrecipes.com/recipe/chicken-wild-rice-casserole-50400000117969/
This was amazing!  The only downside was that it made an awful lot for just 3 people, so next time I'll cut the recipe in half.  I like to have leftovers to take to work with me, but this was just a tad bit ridiculous!  This was my favorite new recipe of the month!
This picture IS mine: 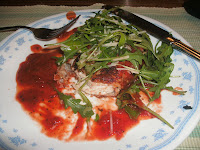 Chicken Milanese
This dish was quick to make:  about 30 minutes.  Racheal Ray would be proud!  I didn't have lemon juice to toss the arugula with, and key lime juice just didn't go with it, so I tossed a little bit of Italian Dressing with it, and it turned out great.  CH didn't really care for the arugula, so next time I may just use some spinach.  I have to admit, I'm not a real big fan of the "stems" on the arugula, either.
To top off the weekend, I made some "Sugared Peanuts" on Saturday: 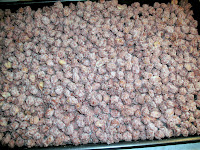 A bit time consuming, but they turned out great!  My FIL brought some Alabama Peanuts to us earlier in the month when he was passing through.  This batch just barely put a dent in the bag he brought up, so I'm going to get some peanut oil so I can make some roasted peanuts.  Another batch of sugar peanuts may be in the future, too!
Some of you mentioned that you'd like to have the recipe for what I called "Eggnog French Toast", but it's actually called "Holiday Morning French Toast".  You can find the recipe HERE.
(This picture is mine!) 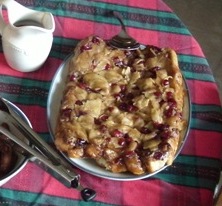 Do you have any good recipes that you've tried lately?
Email ThisBlogThis!Share to TwitterShare to FacebookShare to Pinterest
Labels: cooking