Splashing into the New Year


I originally titled this post "Ringing into the New Year", but decided "Splashing" was a better description.CH, MS, YS, & I drove a little ways from here to enjoy a resort with an indoor water park.
We thought that we might not be able to get into our room until 4:00, so we figured we'd have to hang out in the waterpark until then.  But, our room was ready when we got there, so we were able to get somewhat settled in.  The resort was beautifully decorated for Christmas: 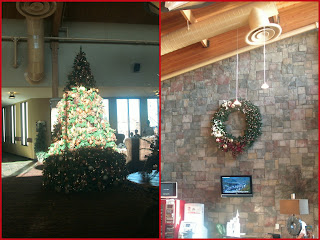 When we got into our room, this was waiting for us:

The boys were excited to be there:

We changed into our bathing suits, jumped on the shuttle, and headed to the waterpark.

Even though the waterpark wasn't as big I was expecting, it was fun.

The big attraction at this waterpark (from the outside): 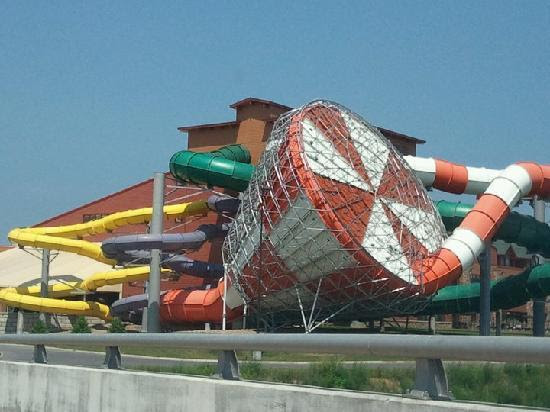 This photo of Wilderness at the Smokies Resort is courtesy of TripAdvisor
Oh. Yes. I. Did.  I may have been screaming the whole time (the first time, anyway!), but I did it.  And I liked it!  There's a big drop before you go into the "cone", and once you're in the cone you go side to side.  Like, halfway up the sides.  At least halfway.  And you feel like you're about to tip over.  (Hence, the screaming.  Both times I rode.)
MS & I rode a couple of the slides that were more twisty, with MS trying to tip it as we went into the curves.  The result was me getting dizzy, especially on the 2nd slide that's dark inside.  When we got to the bottom, I finally got off of the tube, but was still dizzy.  I didn't realize I was right at the steps, and I stubbed my foot, just under my toes.  Then,  CH & I went into the wave pool, where he accidentally kicked me in my shin.  Surprisingly I don't have a bruise.
YS did real well on the boogie board (or whatever you call it):

He was the only one who had to stop because he had been on it for his allotted time.  Most of the people we watched fell off of it or were going over to the side.  2 times of messing up was all you got.
MS decided to try to "surf":

That was attempt #1.  He did a little better the 2nd try:

There was also an indoor/outdoor hot tub, which would have been really nice except for the children that were playing in it.  I saw one little girl who was red from staying in so long.  Really, what are some parents thinking by letting their small children get in there and stay so long?
We stayed for a few hours, then went back to the room, changed, and went to a New Year's Eve buffet at one of the restaurants.  Not too impressive, but we ate until we were stuffed.  Then we went back to the room and rested up.  The park closed at 9:00, then reopened at 10:00.  YS was really excited when we walked in after 10:00:

It was a totally different way to spend New Year's Eve, but it was fun.  MS said it was the most fun he could've had, given the circumstances (that he was with us and not his friends)!
And so begins another year.  I'm glad to see 2011 go.  I'm ready to take 2012 as it comes!