I was thinking of changing the name of my blog, because, well, I feel like it's a little misleading.  While the town where I live is considered "small", there are a lot of bloggers out there who live in towns much smaller than mine.  Our population is around 8,000, but the town is "connected" to another town which makes it seem larger than it is.  And, we have plenty of restaurants and stores.  Soon, there will be more.

A couple of months ago, "they" started clearing some land.  Trees that once lined the highway leading to "the big town/city" are no more.  We do have a very nice view of the mountains (just look past the power lines!):

Knocking the trees down have just exposed the plant that is still in operation:

CH thinks that painting the plant green would help it to blend in.

The reason for the clearing is so that a "bypass" can be built.  The highway leading to the big city is known as "I'll kill you" highway.  It's a 4-lane highway with a lot of fast food restaurants.  So, you have people pulling onto the highway, and slowing down to get off.  It's been that way as long as I can remember.  It also was called "The Motor Mile" because it used to be a mile of car dealerships, but some have closed down.  The bypass will provide a thru-way for those people who think they have to live in the next town over but work in the big city. Luckily, we won't be affected too much by it.

Just past the area that has been cleared lies empty land.  This is where one of the plants stood.  Some of the land can not be used due to the product that the plant dealt with.  The land is too contaminated to build on.  Part of the land is now the softball/baseball fields for the high school.  A developer bought some of the land and supposedly is planning on turning it into something like this: 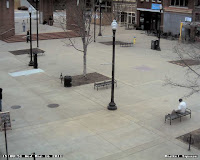 click on picture for credit
Or, so we were told.  A few weeks ago I saw in the paper that a major retail store has expressed an interest, but with the stipulation that if the name of the store is leaked, they'll pull out.  So, if  a major retailer is planning on building, I have a sneaky suspicion the area won't look like the above picture.  If I wanted to live next to the above location, I would've bought a home right next to it.  To say I'm a little peeved is putting it mildly.   People move to our small town because of it's charm.  Part of that charm is that it's quiet.  During a meeting, we were told that the initial projection was that "they" would expect 24,000 cars coming through.  That's 3x the population.  Property values will go up, but at what expense?

So, they can keep their "progress".  I moved back to my hometown because while some things have changed, many things stayed the same.  Kids still walked to & from school through the park.  The pool was and still is "the" place to be in the summer.  I just hope this "progress" doesn't make it too dangerous for kids to continue to be kids in the small town.  "They" heard the people loud & clear at the meetings, but, as one of the city employees told me, "If a developer buys the land, he can pretty much do whatever he wants to with it", whether the citizens want it or not.  Elections are coming up, right???
Email ThisBlogThis!Share to TwitterShare to FacebookShare to Pinterest
Labels: small town