We actually camped for the whole weekend (instead of just one night) over the weekend!  We met CH's brother & sister-in-law at a nearly half-way spot between our houses. There is a spot along the way that I've always thought was so pretty.  The interstate curves around the lake/river, and there are hills all around it.  (Click on a picture to see larger views.) 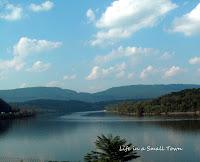 Then, a little farther down the road, there's this college that sits on top of a mountain: 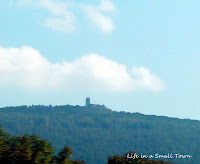 CH & I got there first since he didn't work on Friday and I had a half-day (YAY for Fall Break!).  We set up our camp and looked over the area.  When we registered, we had a few campsites to choose from.  They originally had us at a couple of spots at the entrance.  I felt like it was out in the open, so we looked around and found a spot at the edge of the woods, so we felt like we were "out there". 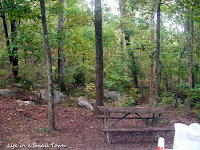 It turned  out to be a perfect spot for us.  Friday night's weather was just about perfect:  not too cool, not too warm.  CH bought a memory foam topper for our camper bed, and it was amazing.  Almost like being in my own bed!  The cushions on the bed weren't that uncomfortable, but the topper is sooo much better!
Saturday morning, we woke up to rain.  CH fixed bacon & pancakes, and we huddled under our awning..and the back of the camper until the smoke from the bacon set off our smoke alarm...several times.  I think he ended up in the rain...but it wasn't a heavy rain.  After breakfast was cleaned up, CH decided that we really needed to get an easy-up, so we trekked into town to get one.

By the time we got back, it was just about time for lunch: 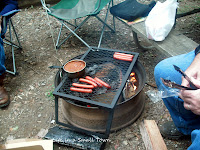 There was plenty of sitting around and talking about "stuff": That night, we had a visitor.  CH's best friend from high school doesn't live very far from where we were, so he came by for supper. 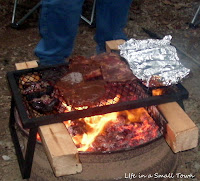 There was more "shooting the bull": 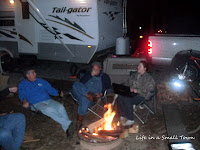 These 2 guys are MS' namesake:  we got his first name from one, and his middle name from another.

CH's BF left just as it was starting to rain, and it was getting late, so we decided to go on to bed.  There was wi-fi (and cell service!), so I plugged in my laptop to watch another episode of  "Doc Martin".  I lasted about 5 minutes before I was asleep.  That night, we really had a gully-washer.  I laid there thinking, "I'm so glad I'm not in a tent!"  Even though our little trailer is kind of a "glorified tent", it was really nice not to have to deal with bedding and clothes getting wet, and the tent leaking.
CH was excited all weekend to try out some Dutch Oven Cooking.  He had plans to make cinnamon rolls.  Not from scratch, mind you, but in the DO (that's the abbreviation for "Dutch Oven", just in case you didn't catch on!  I saw that on some websites and finally figured out what it was!).  All he did was take parchment paper, put it in the "DO", and put 16 hot coals on the lid, and 10 on the bottom.  I found a conversion table on the web to find out how many coals to put on.

It worked!  Amazing!  They were really good, and he did great; especially for his first attempt.  We cleaned up, got packed up, then took a side trip to the Lodge Cast Iron Factory Outlet. 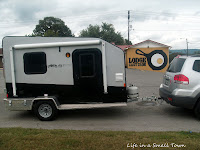 It was a little out of the way, but well worth it.  We could've spent a fortune in there, but we restrained ourselves.  We ended up getting a smaller DO that would be just the right size for 2, a griddle to go over the camp stove, and a couple of little "single serving" skillets that are going to be great for fixing eggs in the morning.
Right next to the store is the factory, where they make the cookware: 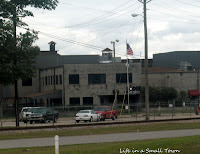 The little town that this is in has a "Cornbread Festival" that takes place on the last weekend of April.  They give tours of the factory during the festival.  To read more about it, please visit Southern-Belle-Simple.  She wrote a post about it in 2011.  I told CH that we should come back for that.  I just love small towns that show support for their high school by placing banners all through downtown.
All in all, another wonderful weekend.  This is the first camping weekend that was relatively stress-free.  I think we're settling into our roles with setting up/breaking down camp, and we're starting to get a little more organized with how we're doing things.  This was also the first time we didn't forget anything major! Yep, things are finally getting a little stress-free with the camping!