I forgot to mention what I did during the day on Friday.  My work area looked like this:

There is a campground that CH had heard of, about an hour from where we live.  We decided to check it out and spend Sat. night camping. (You knew this was coming, didn't you?)  We also decided to try camping with 2 dogs:  Pepper & Laika.  Pepper has been camping before, when we went to a few motorcycle rallies.  She did great...once we got there.  On the way down, she was on my lap, panting like crazy, and sticking her head out of the window every few miles.  This was the first trip that we didn't have a dog barfing in the car, so they did pretty well.
(Don't forget: you can click on a picture to make it bigger!)
The view from our campsite: 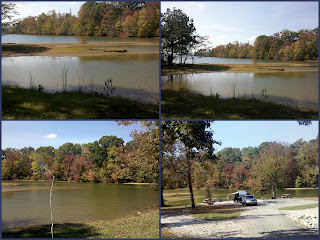 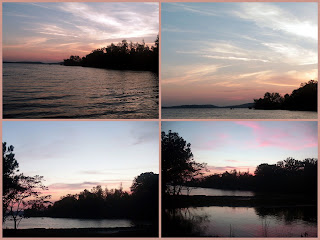 Some views around the campground: 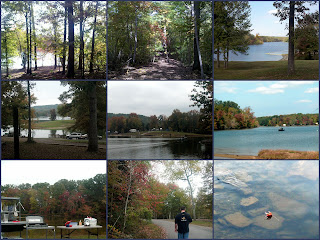 We walked around the campground, and, honestly, we didn't see a bad site as far as the view goes.  The sites were a good size with plenty of space between them.

CH fixed breakfast the next morning: 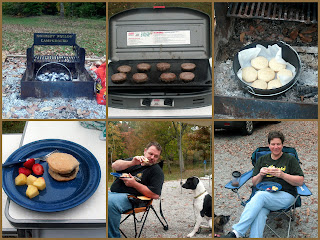 There was suppose to be egg on the biscuit, but "someone" had a little mishap: 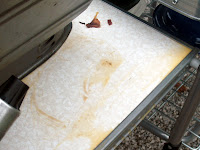 (That would be egg on the back of the stove, where most of it slid after CH put it on the griddle.  Guess the stove wasn't even!)  As I was getting the biscuits out of the DO (remember, that's "Dutch Oven"!), the parchment paper tore and all but 2 biscuits landed on the ground.  A little dirt never hurt anyone, right?

This is hard to see, but there was a humongous gaggle of geese flying over the lake:  Oops... I just looked it up.  Did you know that if the geese are in flight they aren't called a "gaggle"?  They're called a "skein".  Learn something new every day! 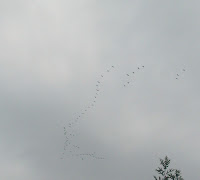 Here are the camping dogs at the site: 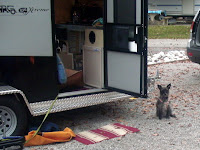 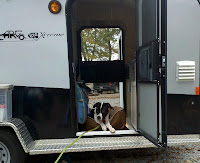 Out in the middle of the lake, there was this: 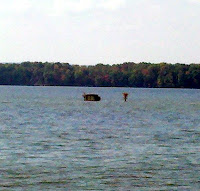 For you northerners:  no, it's not a iceshack (or icehouse...not sure what you would call it!).  I asked the owner of the campground, and she said that she had never seen it before.  It definitely looks like it was on dry land at some point.  She thought maybe it was a duck blind.  Who knows!

The campground wasn't too far from this, which was in the news about 3 years ago for an ash spill.  We saw no remnants from it, but maybe we didn't know what to look for. 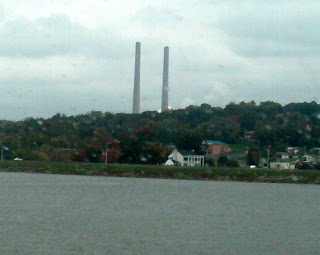 On the way home, we saw this on the hill: 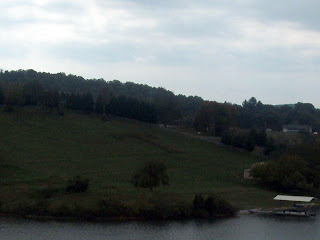 Just in case you can't see it, there's a "Power T" right in the middle.  Orange blood runs deep around here!
We had an excellent weekend, which is becoming the norm for our house!  Thanks for taking the time to keep up with us!