Yesterday was a cuddle kind of hump day.  After YS left for school, and CH for work, I sat on the couch with Laika on one side and Pepper on the other, and read just about everybody's posts for the Hodgepodge. Pepper was in her normal spot: wedged in between me and the arm of the couch.  Laika decided to come up next to me and cuddle.  When I got up to do something, this is what I returned to: 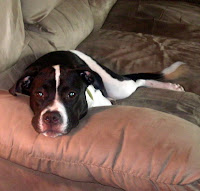 Who could resist that little face?  I wanted to take a couple of pictures of her on the couch with me, because it's not often that she's cuddling with me...it's usually CH.  Then I remembered my webcam (DUUUUUHH!), and this is what I got: 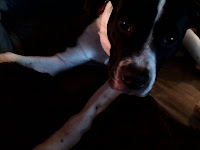 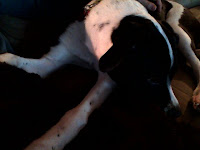 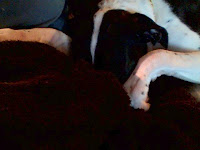 As I was reading and commenting, I noticed that she was watching the cursor on the screen.  Here's what she did:


I had a semi-productive day afternoon:  I finished the laundry and reseasoned a cast iron skillet.  I thought about taking a before picture, but then I started getting the rust off and forgot about it.  It was a MESS; it was so incredibly rusty, we almost threw it out.  But, after some elbow grease, here's what it looks like now: 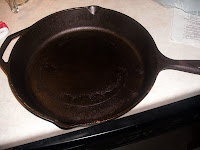 Not bad, huh?  I looked on the back to see what kind of skillet it is, and it's a Lodge Cast Iron Skillet!  Made right here in Tn.!  If you read my post on Monday, you may remember that we visited the factory outlet that is next to the factory over the weekend.  It's good to know that there are still companies in the U.S. that make a good product!
I can't believe it's already Thursday.  I've got a few IEPs to write so I don't have to worry about them during the work-week, and I wanted to get some therapy materials made.  Monday will be here before you know it.
Email ThisBlogThis!Share to TwitterShare to FacebookShare to Pinterest
Labels: dogs