~  Thursday night was the band's Halloween Half-time show.  Well, it was their usual show, only they dressed up.  If you caught up with me during the Hodgepodge on Wednesday, I mentioned that the band dressed up with a "Braveheart" Theme.  I found a couple of pictures on Facebook, courtesy of the football booster page:

I wondered where he got the blue & green plaid from...until I saw the remnants of some pj bottoms on the floor of his room!  Even the band director got in on it:

~  As I drove between schools on Friday, I snapped a few shots.  I'm disappointed that the colors didn't come through...the drive was gorgeous.  I had the windows down and thoroughly enjoyed my 20 minute drive! 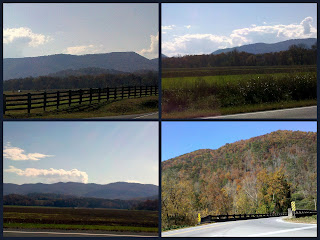 But, these 2 pictures are my favorites.  I love how just half of the tree has turned in the first one, and I just like the way the other one looks, with the leaves changing in the background. 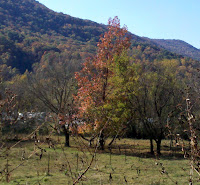 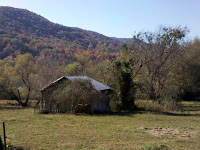 My sister came down Friday evening.  We had a nice late dinner at Chili's, then went back to the house and talked some more and watched a movie.  Saturday morning, I finished up getting the food together for the band competition.  We were there around 9:45 a.m..  I lost my sister at one point, until she texted me to let me know she found a spot to work...outside.  Oops, sorry!  I ended up inside doing the prep for the condiment table and concession stand.  Once that was done, it was a matter of keeping an eye on concessions to see if anybody needed anything.

At 4:00, my sister & I were suppose to take over the upper gate, only her relief didn't show up.  Someone finally took over for her around 5:00, so we then took over the gate.  It's amazing what people will do so they don't have to pay $6.  This one man came in and said that he forgot his wallet, and his grandson (who was marching in one of the bands) would pay us later.  I was talking to one of the police officers, and he said that man told him that he had a housekeeper who was stealing from him.  He told him to come down to the station on Monday and file a complaint, so I told him that if the man came, to get our $6!  When that man came through, there were a couple of men who said this was the first competition they've gone to that they've had to pay.  I told them I wanted to know where they've been, because I've never been to a competition where you didn't have to pay.  They mentioned a couple of schools, but then they slipped up because they said another school that we had been to last week. I told them that I knew for a fact that you had to pay there because we were there last week & I had to pay to get in.  And, we had to check that people who came in had marks, and one lady was really ugly because we asked to see her mark.  THEN, there was one person who came in and flashed a press badge.  I should've gone after her and gotten our money.  There were even a couple of girls who stayed outside of the gate on the hill and watched our rival school's band.  They even had the gall to yell while they were watching.  It's just amazing.

Before my sister got up to the gate, I noticed a couple coming out of the gym door, holding a bill up to the light.  It turned out that they said they had found the bill on the driveway, then started looking at it.  They took it to the police officer who confirmed that it was counterfeit.  The lady asked if she could have it back and the officer said, "uh, no."  Then she said that she wanted to take it to the police, and he said, "Who do you think I am?"  Guess she thought he was a "rent-a-cop"!

The temperatures dropped during the day, and it misted for a while.  I was nice & warm in my new jacket!  I never got cold.  All in all, it was a good day, and I think we made a good bit of money.  The highlight of my day was getting to see my awesome band director that I had until my sophomore year, and his wife.  We talked just long enough to catch up with what our kids are doing, then he was ready to get out of there before it got too crazy. After we got home, we indulged in hot chocolate (with steamed milk from my espresso machine) with a tad bit of peppermint schnapps.

~Sunday was spend resting, catching up on blog-reading, and doing laundry.  With the cold weather, I figured I'd better get my cold-weather clothes out.  It took a little longer than usual because there were several things I wanted to try on the make sure that either they weren't too big, or that I could get into them again.  I'm halfway to my weight loss goal!!!  It was a nasty, cold day, capped off by an episode of "Call the Midwife".

~  I'm finally getting a breather on meetings at my new school, so I feel like a giant weight has been lifted!  Check out our 7-day forecast: 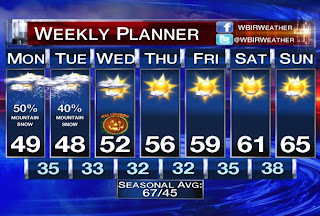